California is a state that seems a bit hypocritical with its liquor laws. One the one hand, liquor stores are abundant in the state; you can find one practically on every street corner. On the other hand, its laws governing craft distilleries are based on ones drafted during the Prohibition era. As such, it is incredibly difficult to open and operate a distillery in the Golden State, especially if you want to provide tastings.

Fortunately, however, though it’s difficult, it’s not quite impossible for the determined. One such distillery which we previously made mention of for its rather unique American single malt whiskey is called Greenbar, tucked away in a somewhat nondescript building just off of the I-10 freeway on the southeastern corner of downtown Los Angeles. 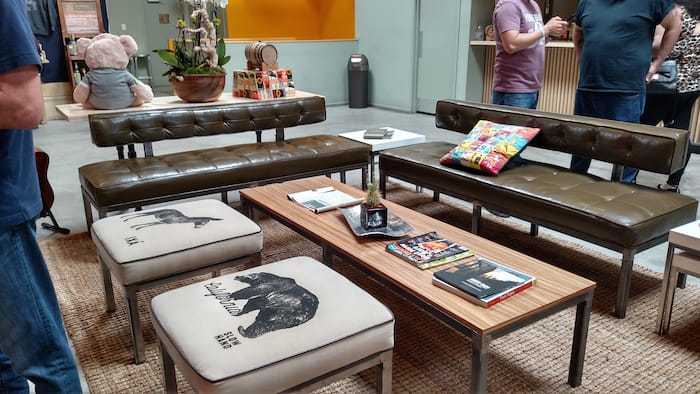 Inside the Greenbar tasting room. (image copyright The Whiskey Wash)

Once inside, you’re greeted by a lovely host, who checks your name and offers refreshments. The tastings/tours are by reservation only (they keep the doors locked at all times), so if you come early, you must wait for the rest of the group to arrive. Upstairs is their tasting room and retail shop. It’s much more glamorous than the downstairs, offering a full bar, seating, and a view of the distillery itself. The Greenbar distillery makes 12 different liquors and liqueurs, but due to California law, you’re only able to taste six at a time (incentive to come back). Before they offer their tastes, however, you are treated to a story about the owners and why they started Greenbar.

11 years ago Melkon Khosrovian and Litty Matthew began the distillery as a direct result of Melkon’s Armenian family. It is traditional in Armenian culture to drink aperitifs and digestifs during a meal. Unfortunately for Litty, they were rather pungent and foul-tasting. Instead of just refraining from drinking at family occasions, however, the duo started making their own liquors, using vodka as a base and infusing it with ripe fruit. After a while, their liquors became so popular among Melkon’s family that they started the distillery.

Now that we’ve gotten the history out of the way let’s talk about their Slow Hand Six Woods whiskey. We all know that whiskey is aged in barrels; otherwise it wouldn’t be whiskey. The aging process is where all of the flavors and colors come from. These days white whiskey is becoming more popular, but that is just alcohol that hasn’t been aged. This results in higher alcohol content and less flavor. Oddly enough, in California, the alcohol needs to only be aged in a barrel for 10 minutes to be called a whiskey. 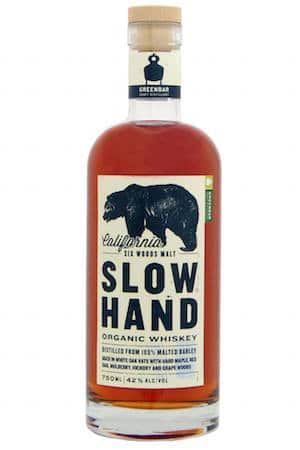 As far as barrel selections go, most distillers use white oak, due to its durability and lasting shape. Making a barrel out of another wood is rather difficult, so most places don’t do it. At Greenbar, they lamented the fact that there were so many different types of wood out there providing so many different kinds of flavor. However, since they couldn’t make barrels out of all of them, they decided to go another route; inserting the wood into the whiskey during aging. As a result, Greenbar makes a six wood whiskey that is both smooth and rather complex.

The woods they use are mulberry, hickory, red oak, hard maple and two grape woods. Each wood has a distinct flavoring, so they make sure to place each one in the batch for a predetermined amount of time. Much like inserting a teabag into hot water, this allows the flavors to infuse into the whiskey much easier than aging them in different barrels.

When you taste their whiskey (they do also have a white whiskey, but I didn’t taste it), your first reaction is that it doesn’t burn as much as most other brands. Because of the lack of burn, you can actually taste the flavors of the wood. Hickory has a bit of a butterscotch flavor whereas maple, of course, has more of a sweet, syrupy flavor. Combined they make for a rich, robust whiskey that can be enjoyed neat, on the rocks, or mixed in a cocktail (although that would almost be doing it a disservice).

In addition to their whiskeys, Greenbar produces a silver and spiced rum, two types of gin, three kinds of tequila (which are made in Mexico), four flavors of vodka and five different liqueurs: orange, yellow poppy (extremely bitter), jasmine, ginger, and hibiscus. They also produce a range of bitters to mix into cocktails.

As far as distilleries go, this is probably one of the best ones around. I have been to multiple distilleries (mostly in the Pacific Northwest), but none have the same attention to detail or the same level of intense flavor as the liquors produced at Greenbar. Seeing as I still have six more tastes to try, I can certainly say I will be going back for more.