A distillery and brewery focused on creating exceptional spirits, coming together to make a whiskey out of a hoppy IPA? Sure enough, Iowa’s Foundry Distilling Company and Minnesota’s Surly Brewing Company recently collaborated to create Furious Whiskey, distilled from the wort of Surly’s Furious IPA beer.

“This has been a fantastic collaboration with our Midwestern neighbor, Surly Brewing Company,” said Scott Bush, owner of Foundry Distilling Company, in a prepared statement. “We know whiskey enthusiasts will love this take on their iconic, hoppy, and aggressive Furious IPA.”

Surly’s Furious IPA is hoppy and citrusy in nature and has been distilled into an American single malt whiskey with notes of the zesty, citrus sweetness found in its beer counterpart. Surly brought the beer’s wort to Foundry, where it was fermented, distilled, and aged for 24 months in new 30-gallon charred American Oak barrels to produce the whiskey. 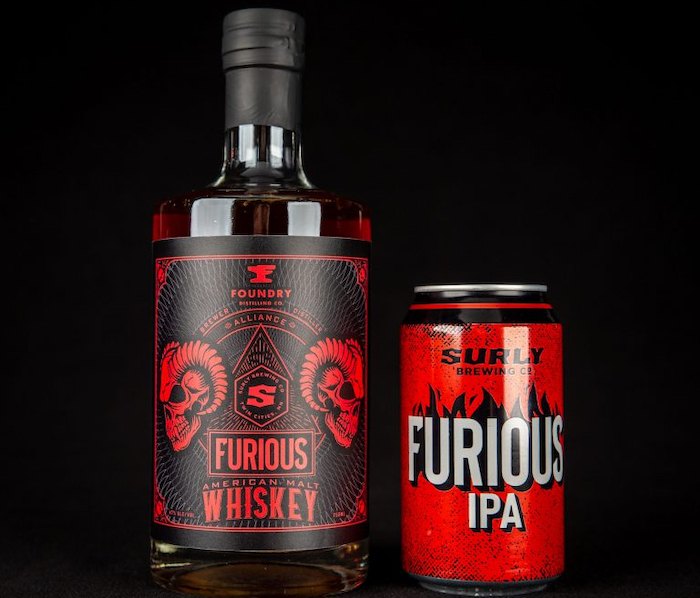 In total, Foundry made 1,000 cases in a limited run that, according to them, pushes the envelope of what makes a spirit unique. It released into the wild on July 10th, and you’ll find some official tasting notes below.

The collaboration with Surly came about through Foundry’s Brewer-Distiller Alliance initiative, which works with breweries across the nation to produce distinctive whiskeys from their beer recipes. The breweries produce the wort using their recipes, and Foundry then ferments, distills, and barrel ages the spirit to create whiskey.