Left Hand Brewing Company out of Colorado recently announced the release of its new Sinister Malt Whiskey, created in partnership with Foundry Distilling Co. through the latter’s Brewer-Distiller Alliance.

Distilled from the mash bill inspired by Left Hand’s Milk Stout Nitro, Sinister Malt Whiskey is the first in the partnership between the brewery and the distillery. In 2019, Left Hand began a batch of the stout, creating a sweet liquid infusion of roasted malts. Before the addition of lactose or the process of fermentation that would turn it into a stout, this wash was transported from Colorado to Iowa to be fermented, distilled, barrel-aged, and bottled as a whiskey.

Aged 24 months in 30-gallon charred oak barrels, Sinister Malt Whiskey exhibits aromas of honey, apricot, and caramel with flavors of chocolate, fig, and crème brûlée, before finishing with a subtle sweetness balanced by peppery and woody notes, according to official tasting notes. 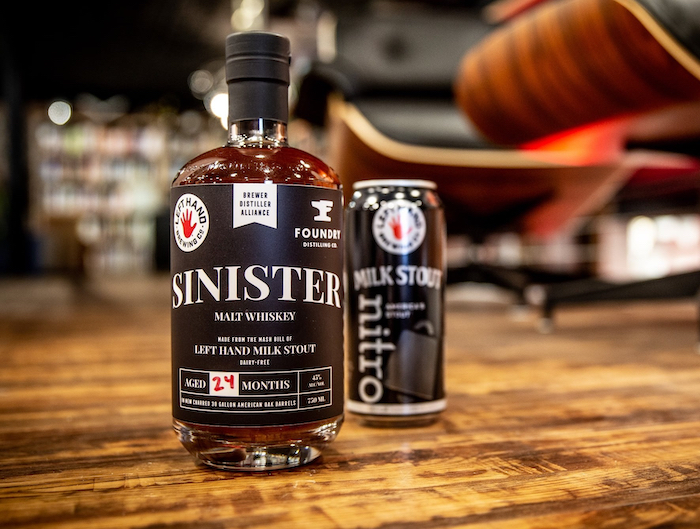 “Our Milk Stout Nitro is renowned for a super smooth mouthfeel that delights the palate with notes of milk chocolate, roasted coffee, brown sugar, and vanilla cream,” Jeff Joslin Director of Brewing Operations at Left Hand said in a prepared statement. “Taking that same grain bill and transforming the recipe for a world-class beer into a world-class whiskey was a satisfying experience. Notes of chocolate and vanilla still prevail, and the wood aging added a delicate yet complex array of dried fruits and caramelization with just a hint of spice.”

Foundry’s Brewer-Distiller Alliance has already resulted in the release of a number of high profile collaborations between the distillery and a popular regional brewery, such as the recently revealed Arrogant Bastard Whiskey that was distilled from the wash of Stone Brewing’s Arrogant Bastard Ale.

12
Shares
805
Views
Share on FacebookShare on TwitterGet Our Newsletter
Get The Glenlivet 18 Year Old at ReserveBar. Shop now!