Few Spirits, as we chronicled about them last year, is one of the more well known craft distilleries out of Illinois, being founded in 2011 and operating out of a tucked away alley located in the growing Chicago suburb of Evanston. Founder & Master Distiller Paul Hletko is the whiskey maestro in charge here, and for his latest release he has created a rye whiskey that was proofed to bottling strength using cold extracted tea.

The new Few Spirits Few Immortal Rye, according to those behind it, takes cask strength rye whiskey from the distillery and proofs it to bottling strength with cold-extracted “8 Immortals” tea from Denver-based tea purveyor The Tea Spot. It is believed to be the first product to apply this proofing technique using tea, having initially been distilled from a mash bill of 70% rye, 20% corn and 10% malted barley before being put into barrel for aging. 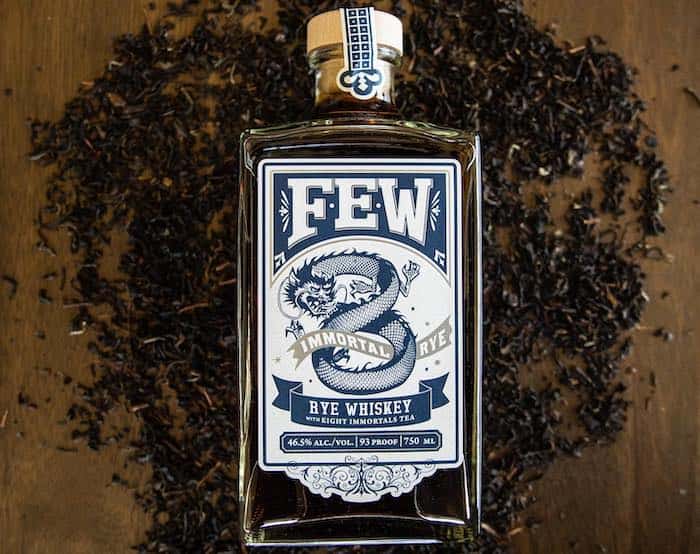 “One of the real joys of this job is the freedom to wonder, ‘what if?’ and then having the creative team in place to try to search for an answer,” said Hletko, in a prepared statement. “Just as we’ve done with previous innovation favorites like Few Cold Cut Bourbon, Few Immortal Rye is an example of taking the space to think about things that have never been done before, whittling that list down to the ones that are actually worth trying, and then creating something that people will not only want to try, but add to their regular drinking rotation.”

As it stands now plans call for this whiskey, bottled at 93 proof, to price around $45 per 750 ml bottle. An initial 6,000 bottles are being made available nationwide, and each bottle “features dragon label art inspired by priceless artwork showcased at the 1893 World’s Fair, which was held just a short journey down the Lake Michigan waterfront from where Few Spirits headquarters stands today.”

Official tasting notes indicate “an overlay of peach, honey, and dragon fruit that is otherworldly.” The tea tied to this expression, for the curious, is a “hand-harvested Dancong oolong produced in small batches by an award-winning, family-run operation which specializes in making high-end Dancong oolongs. These teas are unique to the mountainous and humid southeastern corner of Guangdong Province, China. Grown at an altitude of 2000 feet, 8 Immortals has its own unique tea cultivar.

“After harvesting the leaves, it goes through a carefully monitored process of sun drying and repeated oxidizing, rolling and fluffing. This meticulous crafting yields a tea of abundant natural fragrance which can fill a room. It has complex floral and sweet woody notes, smooth mouthfeel, and a persistent, enchanting aftertaste.”