Few Spirits Miscreant Has Six Goodies In Its Mashbill 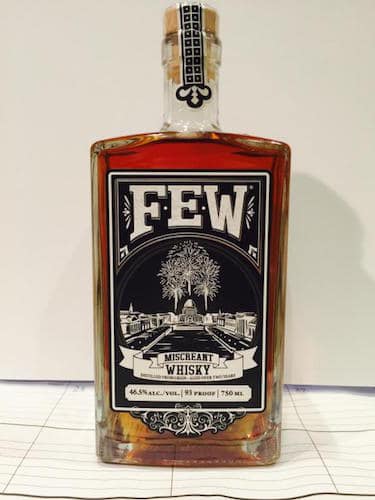 It is pretty rare for us to write about single barrel bottlings offered to retailers from distilleries, as there simply aren’t enough hours in the day to cover everything that’s out there. That being said, we recently learned about a rather interesting whiskey for sale at New York’s Park Avenue Liquor which heralds from the fine folks at Few Spirits in Illinois. It is known as Miscreant, and what’s particularly unique about it is the six elements in the mashbill.

Whereas most whiskies have just a couple of elements, such as corn or rye,making up the primary ingredients, Few Spirits Miscreant draws upon rye, corn,wheat, smoked malt,chocolate malt and pilsner its mash. That is one hell of a combination! Or, as Paul Hletko, master distiller of Few put it in a statement, “the mashbill is a beast!”

The whiskey, which got its name because it was “difficult to pin down as being ‘like’ something else,” is bottled at 92 proof, limited to just 264 bottles and prices at $70. It is a one off expression that “cannot be replicated,” so if you find yourself being particularly adventuresome it might be a fun one to pick up. I’ve put official tasting notes below for your consideration.

The nose is malt, malt, and more malt with a bit of malt in the back. There are sweet bits of sea salt caramel along with a touch of nuttiness. On the palate entry is chocolate powder as well as creamy caramel spread on a leather spoon. Then malt comes front and center in the mid palate with a long finish of delicious ganache backed up with some tobacco.

83
Shares
248
Views
Share on FacebookShare on TwitterGet Our Newsletter
Get The Macallan® Rare Cask at ReserveBar. Shop now!