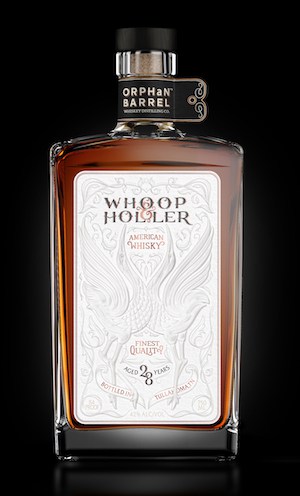 The battle of the super old American whiskies is heating up it looks like as we continue our way through the fall release cycle. Word dropped earlier this week out of the blue about the new, seriously rare Buffalo Trace O.F.C. collection, and now Diageo is firing back with the push out of its new Orphan Barrel Whoop & Holler expression, clocking in at nearly three decades in age.

The 28-year-old Whoop & Holler, according to the spirits giant, heralds from its Orphan Barrel line up of limited edition American whiskey releases. The last time we checked in on this series we had brought you word of the 22-year-old Rhetoric. Obviously this newer bottling steps it up in age in a significant way, and it is also the ninth whiskey to be released under this brand.

Specifics released from Diageo on this offering indicate it to be a “charcoal-mellowed [Tenn. sugar maple charcoal that’s burned on site] whisky that was distilled at the Goerge Dickel distillery” in Tennessee. It as made using Cascade Spring water and boasts a mash bill that’s 84% corn, 8% rye and 8% malted barley.

Whoop & Holler, which is the oldest release to date from the Orphan Barrel bottlings, is bottled at 42% ABV and will price for around $175 per 750 ml bottle. Official tasting notes for it are below from Diageo. The name, by the way, is said in Tenn. to be “an enthusiastic howl,” and is represented on the bottle’s label by “two whooping cranes whose calls can carry several miles.”