The unique spirit is set to be released at the end of this month and is made from the wort of Confluence’s signature beer, Des Moines IPA. Foundry Distilling Co. turned the wort into whiskey through fermentation, distilling, and barrel-aging the product at their distillery in Iowa.

“Des Moines Whiskey started and ended right here in central Iowa with a whiskey which captivates the senses,” Scott Bush, owner of Foundry Distilling Company, said in a prepared statement. “Whiskey and beer lovers won’t want to miss out on this creation.” 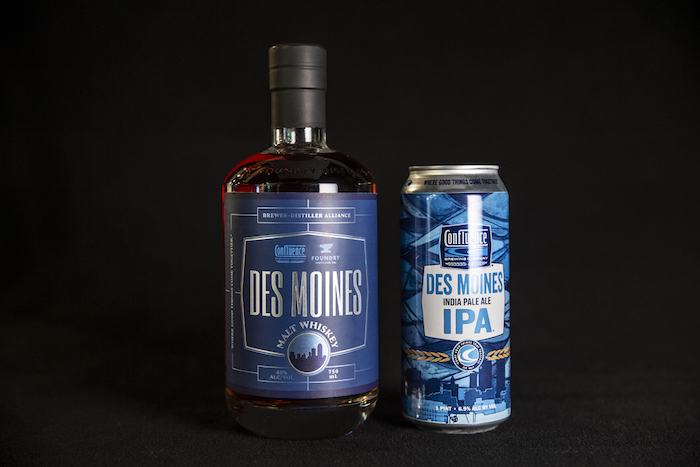 “This has been a great partnership that’s captured the essence of our beer in whiskey form,” said John Martin, President, Co-Founder of Confluence Brewing Co. “I think that Confluence fans, beer lovers, and whiskey enthusiasts are really going to enjoy this special creation!”

The Des Moines Whiskey, according to official tasting notes, has an aroma of mellow tangerine, sweet bread, light-red fruits and green earth, the distillery said. There will be notes of orange citrus and sweet bread as well with a finish of lingering sweetness.

This release comes out of the Brewer-Distiller Alliance initiative, driven by Foundry Distilling, which aims to work with breweries across the nation to create whiskies out of beer recipes.