Wisconsin’s Dancing Goat Distillery recently cut the ribbon on their first open-air rickhouse. Dubbed Rickhouse #1, the non-climate controlled storage and aging facility is the first to be built in Wisconsin and is the first of five that the craft distillers are planning to build over the next few years.

The five story tall, 8,750 square foot building, which can house up to 7,800 barrels, was put together with the help of Buzick Construction, one of the top rickhouse designers and builders. Based in Bardstown, Kentucky, the company has worked with Buffalo Trace, Maker’s Mark, and a bevy of other whiskey distillers to create storage solutions and facilities for aging. With Buzick’s help, the new rickhouse will allow Dancing Goat to store their barrels on their sides, which ensures that the whiskey is exposed to the wood on all sides. 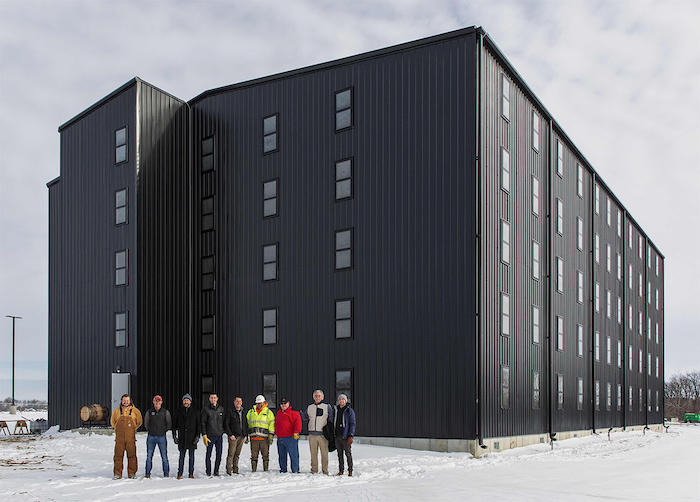 Dancing Goat is a rare distiller in that it ages its barrels in an open air environment, which leaves them subject to natural changes in weather and climate. This allows the liquid to interact more with the staves as it moves in and out of the wood in the barrel.

“When fully exposed to the extremes of weather in Wisconsin our whiskey will move in and out of the staves as the temperature changes throughout the four seasons, making every year of age incredibly impactful,” said Tom Maas, chairman of Dancing Goat Distillery, in a prepared statement. “The mellowing and concentration of flavors occurring during this natural process results in whiskey that connoisseurs will truly appreciate while those new to whiskey will be able to experience whiskey as it was meant to be.”

The barrels in this new rickhouse will be placed and rotated throughout the building during the aging process as the outdoor temperatures and indoor temperatures change. The distillers will also consider factors of airflow when deciding where barrels will go in the rickhouse as that will affect the final proof and flavor profile of the liquid inside.

“Wisconsin’s seasonal temperature goes from -10° in the winter to 90° in the summer. We enjoy the fact that this natural 100° temperature swing allows us to partner with Mother Nature to assist in making our Dancing Goat whiskies special,” Nick Maas, VP of distilling and innovation said, in a prepared statement.

72
Shares
1.5k
Views
Share on FacebookShare on TwitterGet Our Newsletter
Cheers to the Dads! Personalize a bottle of his favorite whiskey to create a modern gift for the modern man. Use code: FATHERSDAY20 for $20 off your next order of $100 or more at ReserveBar