Bendistillery’s Crater Lake Spirits out of Oregon recently announced a new release of their limited Black Butte Whiskey, a 5-year American whiskey made in collaboration with Deschutes Brewery.

The Bend-based businesses first teamed up in 2016 for the release of a 3-year version of this aged whiskey, and returned late last year with a new 5-year version. The American malt whiskey is distilled from the wash of Deschutes’ Black Butte Porter with a selection of speciality malts. The liquid is then double-distilled and aged for five years in new #4 char American Oak barrels. According to the notes from Crater Lake Spirits, the resulting spirit is a “balanced, yet complex whiskey that retains the malty, chocolatey notes of Black Butte Porter and finishes with a soft, nearly sweet, character.” 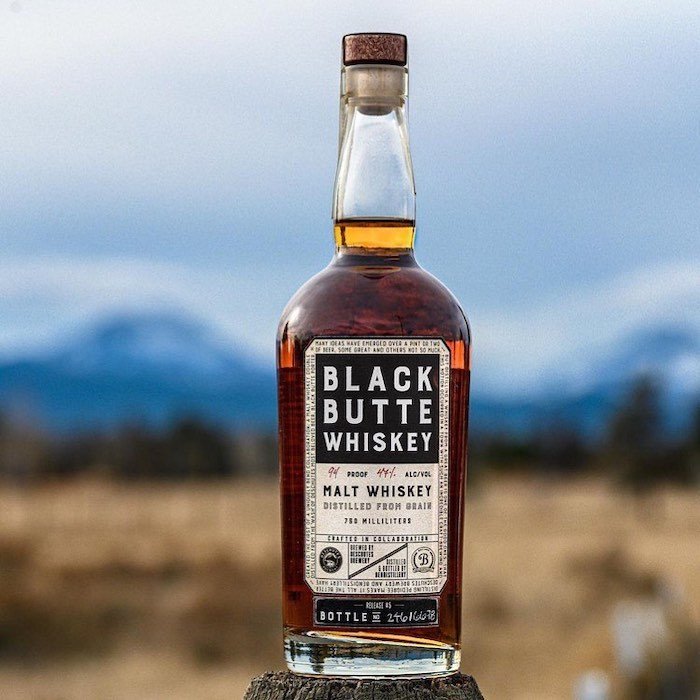 The 94 proof, 47% ABV whiskey has already racked up a number of accolades, including Best In Show and Double Gold from Sunset Magazine’s 2019 International Spirits Competition, and a Gold Medal from the Beverage Tasting Institute.

“We are thrilled by the attention we’ve received, especially to earn Sunset’s Best in Show against such a deep field of brands is really an honor,” said Alan Dietrich, Crater Lake Spirits CEO, in a prepared statement. “It means even more to share this success with our partners at Deschutes Brewery. Both of our teams have worked tirelessly to redefine the traditional American whiskey category.”

In that same announcement, Deschutes founder Gary Fish had this to say about the awards that Black Butte Whiskey has received: “We’re honored to receive recognition that speaks volumes to the uniqueness and complexity of this whiskey. The idea for this partnership was born decades ago through conversations over beers and the result has generated incredible excitement from both craft beer lovers and spirits fans.”

Black Butte Whiskey was initially only available at two locations in Bend: Bendistillery’s Crater Lake Spirits Downtown Tasting Room and their Distillery Tap Room. Once COVID restrictions are lifted, pours of the whiskey will be available at Deschutes Brewery’s pubs in Bend and Portland. Starting this month, bottles of it will be available at select retailers in Oregon and across the U.S.

3
Shares
1k
Views
Share on FacebookShare on TwitterGet Our Newsletter
Get The Macallan® Rare Cask at ReserveBar. Shop now!