The Corsair Malt House is Smokin’ Some Really Great Whiskey

Nashville’s Corsair Artisan Distillery may not have invented coloring outside the lines, but they’ve perfected the idea in the craft whiskey world. The distillery’s motto, “Booze for Badasses,” only scratches the surface of their creative rebellion. Not afraid to experiment, the team at Corsair is shaking up some of the traditional whiskey categories with their unique recipes, alternative grain choices, and house-smoked malts. I recently visited the Corsair Malt House with Tyler Crowell, Chief Operating Officer, and Matt Webber, Lead Maltster.

The Malt House is located on the 300 acre family property of distillery owner Darek Bell, about ten miles north of Nashville in an area known as Bells Bend. This working farm not only houses the malting facility, but also provides the land for other Corsair projects. They’re growing an assortment of wine grape varietals for brandy, having recently purchased an Alembic still from California’s Remy. Bell also secured one of the first licenses in Tennessee to grow hemp.

The waft of hickory smoke greeted us upon arrival and we jumped into conversation over the smokers, although this is the last step of the process. Matt starts explaining the contraption excitedly, “This is a cold smoke. It won’t break 80 degrees. We’re not imparting any heat to the grain; we’re not toasting or roasting it here.” A couple of 50-gallon stainless steel drums contain the burning hickory just outside a converted shipping container. The smoke is pushed inside the container with vacuum pressure where about a ton of malted barley will absorb it for 24 hours. 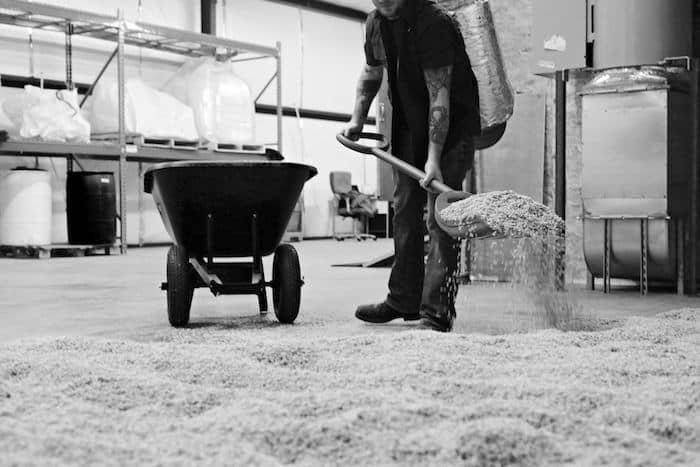 Next, we peek inside an adjacent shipping container used to season the various types of wood that will be used for smoking. On this day, Tyler points out the hickory, persimmon, black walnut, cherry, sugar maple, and pecan woods inside. Many of these woods are still in the experimental phase. “The only product we’ve put out of here has been the Wildfire [Whiskey] which is 100% hickory smoked, but we’ve been doing a bunch of pecan…we’ve done at least a barrel of anything in here.”

We go inside a large metal building where Matt explains the malting process from beginning to end. First, the barley in steeped in one of two tanks where it will increase its moisture level from about ten percent to between forty and forty-five percent over two and a half days. It is then dumped out and spread on the floor at about eight inches deep. “The labor intensive side of the malt process comes in here, as the germination is going,” Matt says with a slight grimace.

He explains how a little bit of mold or dead moss can negatively affect 2,000 pounds of grain very quickly. The germinating grain is physically turned with a rake and shovel every four to eight hours, depending on temperature, for four days. Moisture levels and temperature are monitored closely to make sure the acrospires (rootlets) don’t grow too large or too quickly. Too much growth, and all this work is ruined; the grains would use all of their enzymes and residual proteins, losing their convertible sugars. “It gets to be a fun battle in the summer.”

Step three is the kiln. Here, the grain is taken back down to a four percent moisture level, losing about 1,000 pounds of water in an airtight, controlled environment over 30 hours or so. This step of the process is the most technologically advanced. Matt can monitor temperatures and airflow from his smartphone. When approximately 70% of the water is removed, the “breakthrough” point, the program kicks over, giving the grain a specified flavor, aroma, and color.

After this week-long process, the barley is officially malted and ready for use in a brew. Some of it is sent to the shipping container for imparting smoke. I ask why they go to all this trouble when malted barley is readily available for purchase and the answer is badass: “Because we can.”