What happens when you blend time spent in the Middle East preserving ancient manuscripts and a trip to Jim Beam? If you’re Phil Steger, the founder and CEO of Minneapolis’s Brother Justus Whiskey Company, you get a distillery.

A theology major, Steger had spent plenty of time thinking about how people carry stories and, while drinking some whiskey, he realized that whiskey itself is a way of carrying stories. People gather around it to tell stories and if you ask anyone, chances are they still remember their first dram as well. He also realized that, being in Minnesota, he was in the perfect place to make whiskey.

“It’s the only place in North America where the Great Plains, eastern hardwood forests, and boreal forest all meet. We’re also at the headwaters of the Mississippi. Each of one those things brings a special ingredient needed to make a really good whiskey,” he explained. “We get barley from the plains, oak from the hardwood forests, peat from the boreal forests, and water filtered by the limestone bedrock under it.”

With all of this in mind, he set out to make a whiskey that was unique to Minnesota, while also honoring the distillery’s namesake, a Benedictine monk who was more or less responsible for the roughly 1600 distilleries that existed in Minnesota during Prohibition. 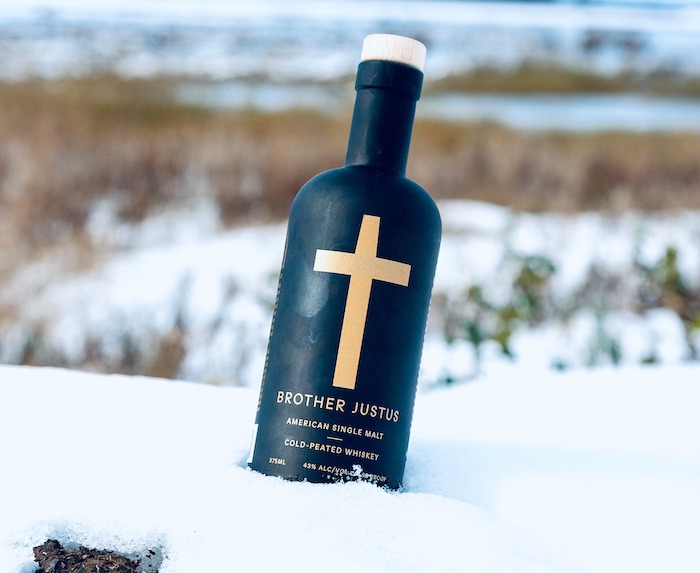 “We had a world class whiskey here during Prohibition, it’s just that it was totally illegal at the time,” Steger said.

A blacksmith at his monastery – where monks were already distilling brandy during Prohibition – Justus took it upon himself to start making stills from copper available around him. Once made, he gave them out and taught people how to make the right cuts and produce spirits that were clean. The whiskey became known as Minnesota 13 and, when it was distributed, people knew where it came from.

“It was the only moonshine in America that had a trade name on the bottle,” Steger said.

In 2014, Steger applied for the proper licenses and set to work making a whiskey worthy of the Brother Justus legacy.

The first thing that sets Brother Justus apart from other whiskeys are the barrels they use. Wanting to make the oak more an ingredient than a vessel for the whiskey, Steger moved to Minnesota Oak barrels (made at a cooperage just a few miles from where Brother Justus lived) after experimenting with whatever other barrels they could get their hands on. The differences, he said, were night and day.

“There’s an intensity of oak flavor, tannins, and vanillins that aren’t present in other white oak,” Steger said, attributing it to the fact that the trees themselves are different than other white oak available in the US. Being grown in the northernmost and coldest state, Steger knew that had to be different.

“It just can’t be the same tree. If you’ve been through a winter here, you can’t be convinced a tree here is the same as a tree from Missouri,” he added.

They encountered a problem, though, when they first started using the Minnesota Oak. The big flavors overwhelmed the distillate.

“We had to get more sugar, more body, more structure, more chemical complexity,” Steger said. To do that, they switched the type of malt they used and voila – they found a distillate that would stand up to the oak.

The biggest difference between Brother Justus whiskey and other whiskeys, though, comes in the form of what they’ve called the “Aitkin County Process.” Steger knew he wanted to use Minnesota’s vast peat bogs – one out of every 10 square feet in the state is peat — to his advantage, and so he began reaching out to different peat companies to see how best to use it. 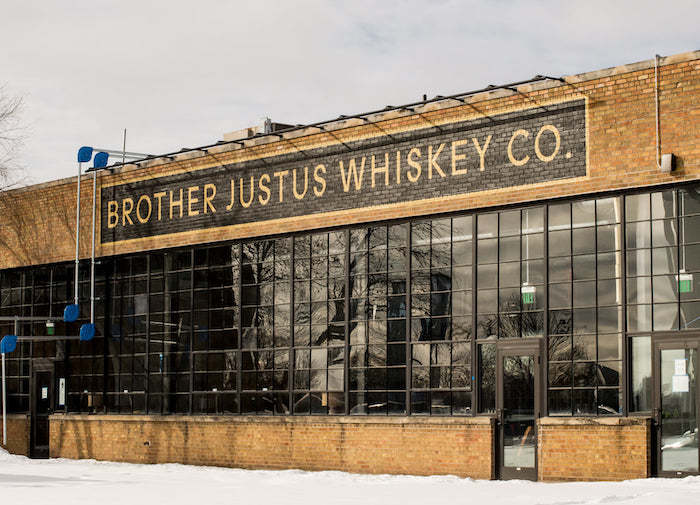 Eventually he landed on American Peat Technology, based in Aitkin County, Minnesota. Despite being an absorptive material, APT had figured out how to present pseudo-geolocial conditions using heat and pressure to make the peat self-polymerize, thereby making it significantly less absorptive.

Once it has gone through this process, Brother Justus takes the peat and introduces it to the distillate. Instead of being burning it and using it to smoke the barley, Steger said they rest the whiskey in the peat, which imparts the flavors of peat in a way that is less impactful on the environment – less peat is used and it isn’t burned at all. Letting the peat sit in the whiskey also helps pull certain compounds out of the whiskey, purifying it. The whiskey is then filtered to remove any particulate matter.

The resulting product has a umami-miso characteristic that also present cocoa notes.

“The Chocolate-miso or mushroom-cocoa notes, when mixed with the caramels and vanilla of the oak and the baking spice and the fruit of single malt itself creates layers of deep, complex flavors,” Steger said.

An added benefit to cold-peating is that you do not have to dedicate an entire batch to peating. Instead, you can apply the process on a single barrel basis and dial in that specific barrel’s flavor profile.

“It presents incredible flexibility and is a great tool for batch development,” Steger said.

With the single barrel experimentations they’ve already done, Steger said they’ve seen a wide range of flavors presenting – everything from peach-kumquat fruit bombs to medicinal iodine. It’s this spectrum they hope to be harness in the future and  present to the public.

“We want consumers to understand peat isn’t necessarily just a Laphroaig. That’s just one application. Our goal is to lower the barrier of what peat can bring while also delivering precise peat characteristics,” Steger said.

After the initial release was met with fervor, Steger is excited for what’s to come next for Brother Justus.

“We’re just getting started in terms of what these flavors can do,” he said.

67
Shares
1k
Views
Share on FacebookShare on TwitterGet Our Newsletter
Get The Glenlivet 18 Year Old at ReserveBar. Shop now!