Whiskey is evolving at a lightning pace, thanks to worldwide demand and a thirsty planet locked down for a pandemic. The next big thing might involve the intersection of traditional hand-crafted American whiskey and world-renowned French wines.

Coalition Whiskey is a new brand started by three whiskey fans who form the actual “Coalition.” 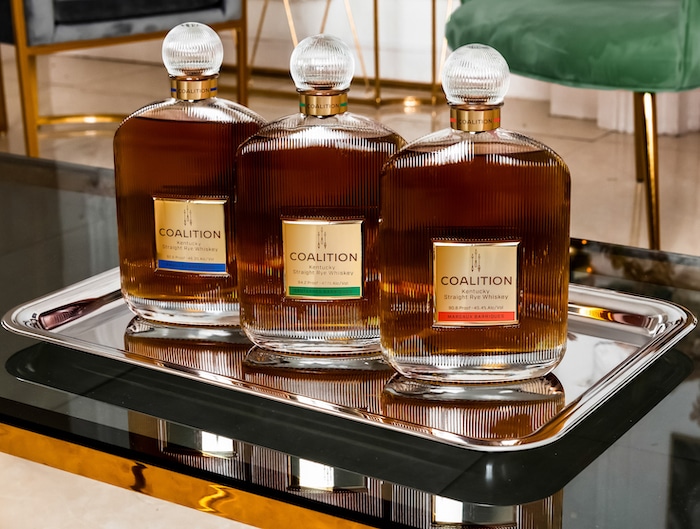 Yangbarber said to us during a recent interview the ultimate goal in using a wine barrel to finish a whiskey is two-fold … first is to delicately enhance the whiskey with the flavors and aromas of the original wine. “You must be very careful not to let these flavors become too pronounced, thus changing the product completely.”

The second is to bring out characteristics in the whiskey that didn’t previously exist. “These could be mouthfeel, texture and structure. In the end, we are looking to add complexity that enhances the drinker’s experience, but not alter it beyond recognition. Our ultimate goal is to coax more flavor out of our 100-percent rye whiskey,” he said.

A 100-percent rye whiskey is rare these days. This elixir begins life at the Kentucky Artisan Distillery in Crestwood, Kentucky. It’s handcrafted, no automation, and comes from an all-copper pot still dating back to pre-Prohibition. The devil’s share is in the details and in each step taken to create the blend of five-year-old rye whiskies, including selecting the rye grain from just a mile away from the distillery.

“A 100-percent rye whiskey is a true rarity in the industry,” co-founder Thompson said. “While most rye whiskies use malted barley or added corn, Coalition Whiskey is made completely from rye. It’s a more expensive way to go, but there was truly no other way to create that deep, rich and spicy flavor we knew would be the ideal match for our velvety Bordeaux wine barrel finishing.”

Bordeaux is one of the most legendary wine producing regions in the world.

“It goes without saying that for a rye whiskey this outstanding, you would only want to finish it in barrels that previously housed some of the finest wines ever created,” Yangarber said.

Once they settled on the wine region, Coalition then focused on the varietals.

“We landed on Margaux, Pauillac and Sauternes because we knew they would bring such different characteristics to the rye whiskey. Margaux would deliver more red fruit and floral flavors. Pauillac gives more black fruit and berries. And, Sauternes gives a sweet spice, with dried fruit and honey. Naturally, there was a lot of experimentation to make sure we were getting the flavors we wanted,” Yangarber said.

Vanneron noted that it took the inspection of nearly 150 barrels just to find the perfect 25 they are using to finish their rye whiskey.

“You have to first start with the best, most voluptuous wines from the finest chateaus in all of France to get the best possible barrels for Coalition Whiskey. Following up to nine months of finishing, each barrel from the separate Bordeaux wine appellations enhances the whiskey in a different, intriguing way.”

Can whiskey vary in taste thanks to the wood it ages in the same way wine gets its variety from the terroir? Yangarber said if you’re talking about traditional whiskey aging, and not finishing, then he doesn’t believe the wood has as much influence on whiskey as terroir has on wine.

“Of course, you can use various woods depending on what type of whiskey you are making and you can use different levels of char, but terroir lends so much to the flavor of wine – from the minerals in the water and soil, to the amount of heat and sun, to the humidity of the air. Even the most minute change can alter the wine dramatically,” Yangarber said.

Thus the level of variety from the wine barrels, which have already done the work of flavoring for the whiskey finish.

“If we are talking about finishing, that’s a different story,” he continued. “Because then, you are talking about not just the wood, but also what wine that barrel held. The flavors that finishing can produce based on the varietal, how long the wine was in the barrel and how long you finish your whiskey gives you near infinite possibilities. But make no mistake, the finishing is meant to enhance the flavor of the whiskey or pull out flavors that were previously lurking in the background. It’s not meant to overpower the base whiskey. That would be downright blasphemy.”

“Whether that be in what they drink straight or what they put into a Manhattan or Boulevardier, higher proof or barrel strength means less water has been added to dilute it before bottling. Less water equals more flavor,” Yangarber said. “The key is to make those higher proof products drinkable. We find our delicate finishing in Bordeaux wine barrels rounds out the taste, making it smoother and more approachable.”

As distillers look to push the boundaries of whiskey, or more likely evolve whiskey, what would be an “out there” barrel to finish a whiskey in?

Yangarber said the opportunities in barrel finishing are endless. “The most ‘out there’ would probably be finishing in a Retsina terracotta amphora. Would I want to drink it? Nope. But I am sure someone will try it.”

He said that for Coalition, a guiding principle in their finishing isn’t “can” they do it in a particular barrel, but “if” they should do it.

“If it doesn’t enhance the flavor in some interesting, yet not overpowering way, then we aren’t interested in it,” he said. “This 100-percent rye is a real rarity in the industry. I’m not interested in ruining such precious liquid just to say it was finished in this wine barrel or that.”

Coalition Whiskey comes packaged in an Art Deco-inspired ridged glass bottle, meant to echo the cut-crystal decanters from the 1920s, rye whiskey’s heyday. The bottle is crowned with a glass domed closure and accentuated with 18k-gold accents.

Each Coalition Whiskey barrel finished expression retails for $90. The barrel-proof whiskey retails at $130. Coalition Whiskey can be found now in the wild at stores in New York, New Jersey, California, Florida, Kentucky, Illinois and Colorado, as well as online at https://www.coalitionwhiskey.com.

59
Shares
1.3k
Views
Share on FacebookShare on TwitterGet Our Newsletter
Cheers to the Dads! Personalize a bottle of his favorite whiskey to create a modern gift for the modern man. Use code: FATHERSDAY20 for $20 off your next order of $100 or more at ReserveBar