Catoctin Creek Distilling, it was announced a few months ago, had partnered with heavy metal band GWAR on plans to release Ragnarök Rye, a special celebrity whiskey. The partnership resulted in 200 cases of the whiskey, with collectable cast-metal bottle toppers featuring each of the five members of GWAR, Blóthar the Berserker; Balsac the Jaws of Death; Jizmak da Gusha; Beefcake the Mighty; and Pustulus Maximus.

Starting later this month, it will become available to purchase across the country. The Virginia-based distillery aged the new whiskey in new charred white oak, then sugar maple and cherry wood to create this 92 proof bottling.

Lead singer Blóthar the Berserker of GWAR said of the whiskey in a prepared statement, “If whisky is liquid sunshine, this rye is a scorching alien sun.” 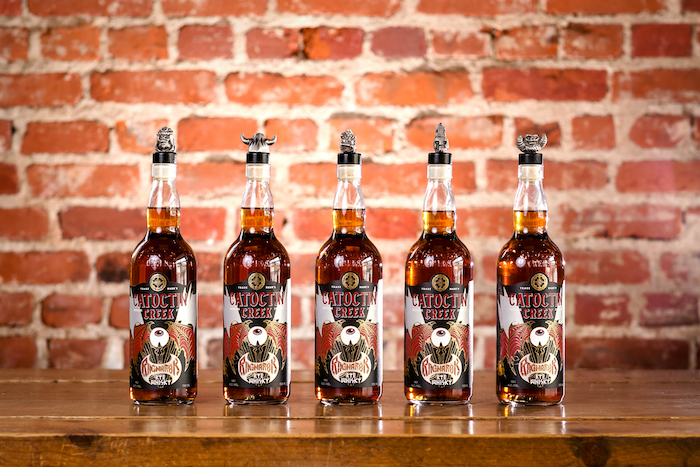 The band worked with whiskey and spirits writer Fred Minnick for an exclusive virtual tasting and review of the Ragnarök Rye. “Well done. This is a great edition to the rye whiskey scene. I think that this is one of the best tastes I’ve had from Catoctin Creek… it is very good,” Minnick said of it.

The 750ml bottles will be sold at a suggested retail price of $99 and are available for purchase throughout Catoctin Creek’s national distribution footprint starting May 28. Customers can also find it on the distillery’s website for curbside pickup or direct shipping in Virginia. Pre-sale orders can be purchased through Seelbachs.com. Catoctin Creek Rye Society members may contact the distillery to obtain a bottle any time before the release date.

20
Shares
634
Views
Share on FacebookShare on TwitterGet Our Newsletter
Read More Whiskey News
Whiskey Review: Jack Daniel’s Tennessee Taster’s Selection #6 Jamaican Allspice
Cheers to the Dads! Personalize a bottle of his favorite whiskey to create a modern gift for the modern man. Use code: FATHERSDAY20 for $20 off your next order of $100 or more at ReserveBar