Building a Boilermaker: The Art of Pairing Whiskey with Beer 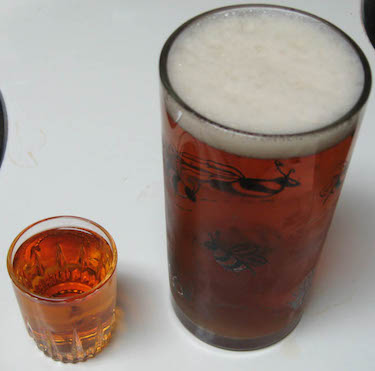 image via Wkiernan (Own work) [Public domain], via Wikimedia Commons

Today’s boilermaker is not your daddy’s shot-and-a-beer. No longer just a way to get buzzed fast, the incredible proliferation of new beers and new whiskies over the past 30 years has opened many doors for exciting new combinations based on flavor, geographic origin, and even cerebral concepts like stylistic resonance and shared philosophical underpinnings.

One of the reasons beer and whiskey pair so well is that they share many of the same ingredients – malted barley, yeast, and specialty grains. That means beers and whiskeys share some of the same flavors, albeit at very different strengths, which provides a great avenue for thinking about pairings: match beers with whiskeys that share compatible flavors. Here are a few suggestions for getting started:

Once represented almost entirely by brews from big producers (think Miller and Budweiser), the American Pilsner category has become much more diversified in the past 10 years. American pilsners can be divided into two major classes: pre-Prohibition or European style, which is made almost entirely from malted barley; and post-Prohibition style, which includes a significant percentage of adjunct grain to supplement the malted barley, often corn, rice, or a combination of the two. Corn and malted barley…sound familiar?

Pilsners are light, crisp, refreshing, making them a good foil for the spicy, caramel-like flavors of bourbon and rye. Low hop bitterness also accentuates the sweet flavors of American whiskey, bringing out the best in the spirit. Try Trumer Pils with George Dickel Rye, or Ninkasi Lux with Wild Turkey 101.

Hops can easily overpower or clash with the flavors in whiskey while amplifying the alcoholic burn. That said, if you’re committed to pairing with IPA, try tasting it next to whiskeys with pronounced herbal or aromatic character, like rye whiskey, craft whiskeys made with alternative grains, or even a hopped whiskey like Amador Straight Hop-Flavored Whiskey or Pine Barrens American Single Malt.