Buffalo Trace Releases A New Round Of Kosher Whiskeys

A new trio of Kosher whiskeys is coming from Buffalo Trace Distillery this May, an annual release first introduced last year.

So what exactly is this kind of whiskey? First, what is Kosher.

“Kosher” is a term used to describe food that complies with the strict dietary standards of traditional Jewish law.

You see, Kosher law mandates that whiskey should not be owned or consumed by Jews during Passover. In 2012, the Chicago Rabbinical Council oversaw the sale of new American Oak Kosher barrels in a contract of sale to a non-Jewish executive, Buffalo Trace Distillery President Mark Brown, where they were filled with whiskey and put away in specially marked “Kosher whiskey” barrels to age. 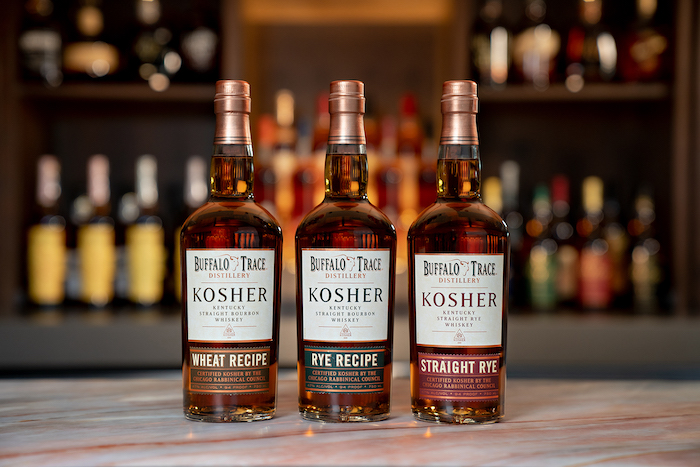 Eight years later, in a year plagued by Covid-19, that whiskey matured and was bottled and released.

Now that the whiskey has reached its desired age, the bottling lines at Buffalo Trace’s Distillery will be flushed completely before bottling to ensure the whiskey is not exposed to any non-Kosher spirits.

As Passover ended this year on April 4th, the whiskey will be released to distributors after bottling later this month. Bottles will sell through wholesalers and retailers before Passover begins again in 2022.

“We were overwhelmed with the popularity of our Kosher Whiskey when we first released it last year,” said Drew Mayville, Buffalo Trace master blender and director of quality, in a prepared statement. “We realize having a truly certified Kosher whiskey is important to not only the Jewish community, but also a broader audience, and we’re pleased that we have the ability to offer it each year to reach this audience.”

The new line is limited, but it will continue to be an annual release each year after Passover. The labels depict both Buffalo Trace Distillery logo and the cRc-Kosher logo.  Each expression of Buffalo Trace Kosher Whiskey has a suggested retail price of $39.99 per 750ml bottle.

46
Shares
2.5k
Views
Share on FacebookShare on TwitterGet Our Newsletter
Cheers to the Dads! Personalize a bottle of his favorite whiskey to create a modern gift for the modern man. Use code: FATHERSDAY20 for $20 off your next order of $100 or more at ReserveBar