Heaven’s Door Spirits, a Bob Dylan-branded whiskey company, has announced the re-release of the 10-year-old Tennessee bourbon they unveiled last year. As we wrote at the time, this is a sourced whiskey mellowed using sugar maple charcoal, the so-called Lincoln County Process traditionally used for Tennessee whiskeys like Jack Daniels. It comes in a commemorative box with a replica of Bob Dylan’s hand-typed lyrics for “Maggie’s Farm” and “Subterranean Homesick Blues.”

“We are excited to offer whiskey enthusiasts the last remaining bottles of Heaven’s Door 10 Year Tennessee Straight Bourbon,” said Ryan Perry, master blender for Heaven’s Door Spirits, in a prepared statement. “The reaction to our first release was so positive, we felt we had to bring it back one last time.” 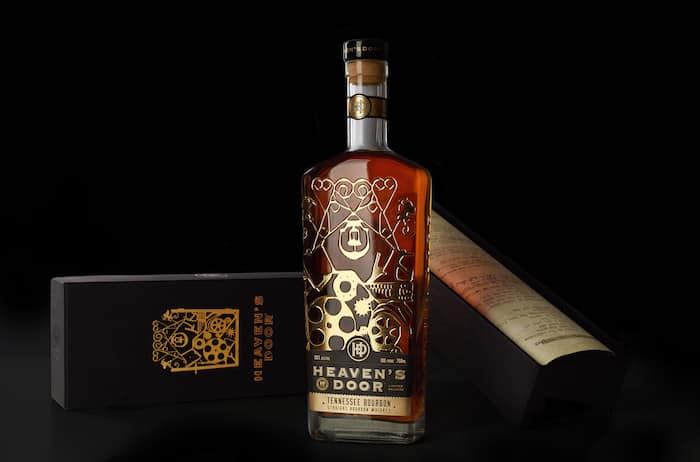 Heaven’s Door also unveiled the Bootleg Series, a high-end lineup planned for release later this year and named in honor of Dylan’s so-called “Bootleg Series” albums. The first expression in that series will be a 25-year-old whiskey finished in Japanese mizunara oak barrels. Mizunara oak is “one of the rarest and most expensive types of oak in the world,” according to Heaven’s Door; trees must be at least 200 years old before they can be cut down to make barrels, and due to high demand for the Japanese whiskey industry, distillers that don’t have access to their own mizunara forest must buy barrels at auction, where they can fetch more than $6000.

Accordingly, the upcoming Heaven’s Door Mizunara expression comes with a suggested retail price of $499.99. It will be available in limited quantities in time for the 2019 holiday season. The fact that Heaven’s Door, which is technically a craft distillery, is going down this Japanese oak road leaves it in a rather very small pool of other American distillers sourcing this wood type. To date, the only other one really known of heralds from a distillery out of Washington State.