The successful launch earlier this year by master musician Bob Dylan of his Heaven’s Door Spirits undertaking saw the coming to market of three initial whiskeys, including a Tennessee bourbon. Dylan and company plan to open a distillery in Nashville next year, so it makes sense to continue the Tennessee whiskey theme via the first limited release from this whiskey portfolio.

Heaven’s Door 10 Year Tennessee Straight Bourbon, according to those behind it, is a sourced whiskey from an unnamed distillery that’s been mellowed using charcoal columns made from Tennessee sugar maple trees, a method traditionally known as the “Lincoln County Process.” It has a low rye content (84% corn, 8% rye, 8% malted barley) and is bottled at 100 proof. 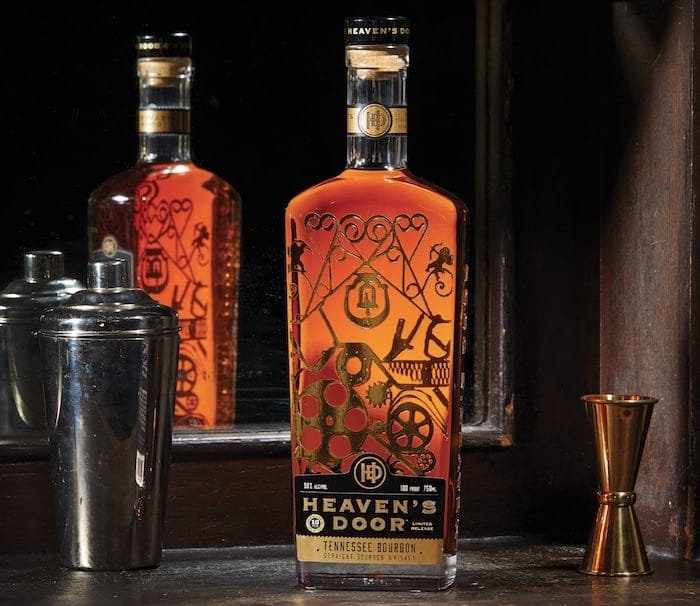 Just like the trilogy of Heaven’s Door’s inaugural expressions, the limited release bottle features one of Bob Dylan’s iron gate sculptures, crafted in his Black Buffalo Ironworks studio. Dylan’s gates are typically created from objects found on farms and scrapyards across the country. The bourbon comes in a composed case, and includes a reprinted lyric sheet featuring the hand-typed words to Dylan’s songs “Maggie’s Farm” and “Subterranean Homesick Blues.”

“We are passionate about challenging whiskey convention through unique barrel finishing, wood experimentation, and blending,” said Ryan Perry, Head of Whiskey Development at Heaven’s Door, in a prepared statement. “At 100 proof and with a low rye mash bill, this whiskey is perfectly balanced and rich in character. After spending ten long, hot summers in a Tennessee rick house, this bourbon was so perfect that we felt any tinkering would have been a disservice.”

Plans call for this Tennessee whiskey to price around $130. Limited official tasting notes suggest “on the nose, there is an aroma of fresh baked bread and nougat. The mid-palate mouthfeel is rounded out with semi-sweet flavors of grilled pineapple and candied walnuts. The finish delivers a perfect balance of sweet and savory with notes of cooked peaches and steeped tobacco.”