There Are Blends and There Are American Whiskey Blends

The word ‘blend’ is primarily a verb. It means to mix two or more things together so they combine into one thing. It is a common word, meaning more or less the same as ‘mix’ and ‘combine.’ It can also be a noun, referring to the combination itself.

A ‘term of art’ is a word or phrase that means one thing in common usage, but something else in a particular trade or ‘art.’ The specialized definition usually is related to the common one, it is just more narrowly drawn. Terms of art exist in many fields, from law to, well, whiskey-making. They can be confusing, especially when you are unfamiliar with the specialized terminology.

Which brings us back to ‘blend.’ Here it gets even more confusing because while ‘blend’ is a whiskey-making term of art, it doesn’t mean the same thing everywhere. In Scotland, for example, a ‘blended whisky’ is a mixture of one or more single malt whiskies with some quantity of grain whisky. That is what it means in Ireland and Japan too. Canada is a little different, but the same in principle. 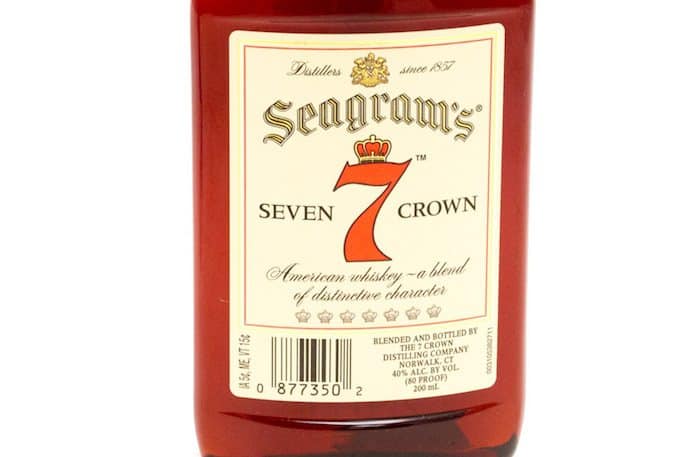 Which brings us to the USA.

The American definition of ‘blended whiskey’ is unique. It grew out of a dispute between distillers and rectifiers that came to a head in 1909. The compromise, issued by President William Howard Taft, allowed distillers to call their product ‘straight whiskey,’ while rectifiers were required to use the term ‘blended whiskey.’

The new rules were written so as to define ‘blended whiskey’ as essentially what the rectifiers at the time were making.

Such a creature is whiskey only in the United States. In the rest of the world, you can’t put neutral spirit in something and still call it ‘whiskey.’ Admittedly, most blending whiskey is nearly neutral, but it is whiskey.

Seagrams 7 is the best-selling American blend. The last time I looked it was 25/75.

Because of the large quantity of neutral spirit in American blends, they are very inexpensive and that seems to be their primary appeal. They are sometimes disparagingly called ‘brown vodka.’ ‘Whiskey-flavored vodka’ may be closer to the point. They are usually served as a highball with a soft drink, most famously 7UP (the ‘seven and seven’ cocktail).

But American blends have not always been that way. In the years after Prohibition, when well-aged whiskey was in short supply, many companies had ‘Class A’ blends that were all whiskey, albeit of different types, and some of it young, but containing no neutral spirit. These went away as well-aged whiskey became more available and blend buyers became more and more price sensitive.

Today, well-aged whiskey is in short supply again, for a different reason, and ‘Class A’ blends may be making a comeback.

More on that to come.

Editor’s Note: This article is republished via permission from its author.