Editor’s Note: There are many bars in America and beyond where you can get whiskey, but only so many which have a whiskey collection that goes well beyond the ordinary. We highlight these in an occasional series called Legendary Whiskey Bars.

And the winner is…for the best whiskey bar in Denver: Whiskey Bar, appropriately enough! For a straight up whiskey bar it wins the prize.

This is a no frills dive bar straight out of some bygone era. It is housed in a building built in 1890 in downtown Denver. Whiskey is their business, period. There is no food, it is strictly a drinking establishment. The website states that they have 200 plus whiskies but Dave Berry, resident whiskey enabler and manager says they are now closer to just under 400 whiskies. It is truly a whiskey wonderland. There is a large electronic whiskey list on the wall that is added to as new spirits arrive to keep things current. It is strangely high tech in such a rustic saloon.

I started with the Balvenie Caribbean Cask single malt Scotch. As a Scotch lover it was warming and familiar. It was a new expression for me of a beloved brand. I visited the Whiskey Bar with two girlfriends and they got a down and dirty intro to whiskey education and then some! We all shared shots of the Balvenie, Blanton’s Bourbon and The Steward’s Solera Bourbon for our first round. 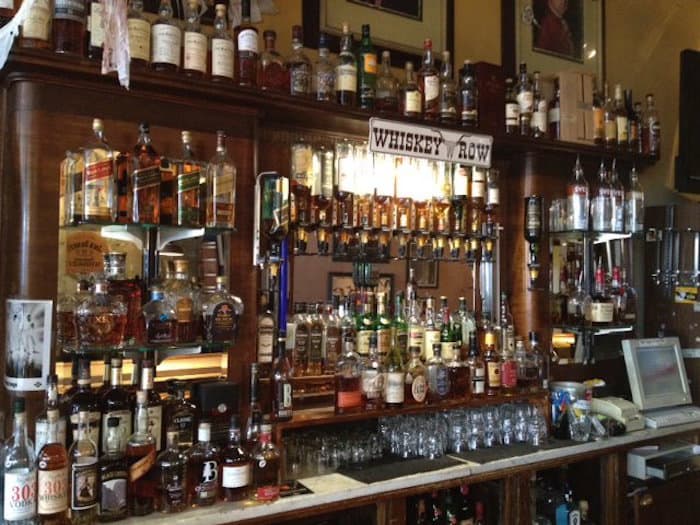 The sweet vanilla flavor of the Blanton’s was a nice beginning for my whiskey novice friends. The Balvenie also appealed to them being a little richer and spicier but still smooth. The Solera at 100 proof was a little advanced for them, I’m afraid. The Stewart’s Solera is a complex whiskey made using the solera system used to make sherry in Spain. In short, they blend bourbon whiskey of different ages from Colorado with bourbons from Indiana, Kentucky and Tennessee. The result is hot straight out of the bottle but with the addition of a little water it opened up and showed a cornucopia of nutty, spicy and fruit flavors among others. This whiskey is so complex that I want to get a bottle and spend some time with it. My cohorts weren’t so sure, however, so we moved on.

We asked Berry what the craziest, most unique whiskies in the house were. He did not hesitate. Our next sample was the Colkegan from Santa Fe Spirits in New Mexico. The Colkegan is a single malt Scotch style whiskey which is peated like an Islay Scotch only using mesquite instead of peat. The result is a wonderfully malty, nutty offering with a unique smokiness that begs to be had with some good barbeque. The amount of smoky flavor is just right and overall it has a great balance.

For our next crazy whiskey we blind tasted a heavy, oily spirit that tasted of very sweet corn with porcine lard overtones. Not even kidding. This was the Ol Major Tennessee Bacon Flavored Bourbon. Sweet corn and bacon fat pretty well sum it up. It is rather strange, heavy, oily and viscous straight, but when Berry mixed a little Crown Royal Maple whiskey into it, it tasted just like maple bacon pancakes. Yum, amazing! Breakfast whiskey to be sure.

By this time my comrades were ready to call it a night. Berry offered us one last shot to round out the evening. I had to help my friends with theirs but it had really nice soft vanilla and oak flavors, simple but good. I asked, “What was that?” Old Forester Bourbon declared Berry, our new BFF. I was impressed, it was a cheap, cheerful and delicious parting shot! I never would have guessed.

Whiskey Bar in Denver is a fun and entertaining place. They even have live entertainment to add to the atmosphere. On our visit a blues guitar player was the perfect accompaniment to our drinking session. Berry is an expert guide to the whiskey spirit world. I can’t wait to go back and do some more tasting!

If you are ever in Denver and would like to try some excellent whiskey of all sorts, stop by.

998
Shares
658
Views
Share on FacebookShare on TwitterGet Our Newsletter
Get The Glenlivet 18 Year Old at ReserveBar. Shop now!