Benjamin Chapman 4-Year Corn Whiskey Said To Be “Smooth, In Every Sense”

“Benjamin Chapman 4-Year Corn Whiskey is the perfect addition to our whiskey portfolio,” said August Sebastiani, president of 3 Badge Beverage Corporation, in a prepared statement. “After Benjamin Chapman debuted in 2020 with the 7-Year Whiskey, we saw an overwhelmingly enthusiastic consumer response. We are excited to launch its American-made counterpart today, a versatile, small-batch corn whiskey that is exceptional in quality with an intangible element of intrigue.”

The premium, small-batch whiskey is characterized by its Kentucky Limestone water source which brings in important minerals and acts as a filter for the base liquid, the distillery says. 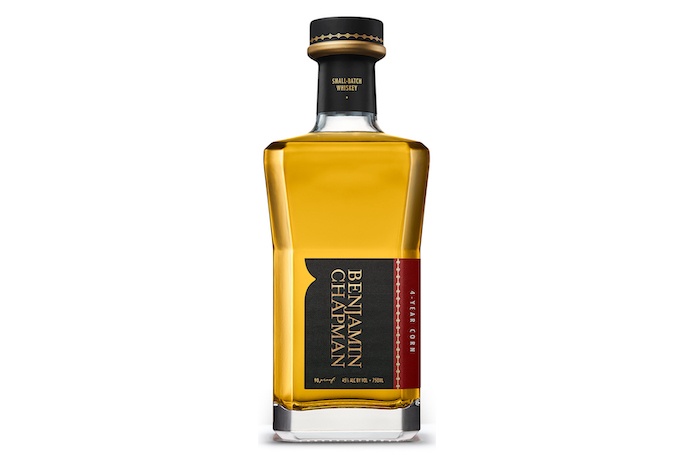 The newest addition to the 3 Badge Beverage Corporation line pays homage to what’s said to be 1960s sophistication and the refined aesthetics of that era.

The Benjamin Chapman 4-Year Corn Whiskey will be sold at a suggested retail price of $36 for a 750 ml bottle and is 45% alcohol by volume. It is fitted with a mash bill of 80% corn, 11% rye and 9% malt. The primary distillation takes place in a column still before it’s moved to a continuous pot still which acts as a doubler to extract flavors. Then, the whiskey is placed in bourbon seasoned barrels where it ages for four years.

The product is a rich golden hue and has aromas of fresh cornbread, smooth vanilla cream and butterscotch layered against baked pineapple upside-down cake, biscotti and toasty almonds, the distillery said. The tropical notes are prominent with a warm and lasting finish.

Benjamin Chapman Whiskey was inspired by Benjamin Chapman, said to be an enigmatic figure from the 1960s’ international jet-set era, who was elusive as he was respected. He became respected for his refined tastes and preference for the finer things.

The design of the bottle is a nod to the time period as well, with diamond facets and a prominent BC signature is etched on the bar top as a nod to the inscription he was said to have left behind on restaurant bills and hotel receipts.