Baltimore Spirits Company, based in its namesake city in Maryland, is celebrating its fifth anniversary as it continues to release batch after batch of its flagship Epoch rye whiskey. Now, in a variant offering from this one, it has made available at the distillery a limited number of bottled-in-bond whiskeys.

The new Epoch Rye Wooden Anniversary Limited Edition, according to those behind it, is said to be the first bottled-in-bond Maryland rye whiskey to be distilled and aged in Baltimore in at least 50 years. In following the guidelines for bottled-in-bond, this whiskey is the product of one distillation season that has been aged for at least four years and bottled at exactly 50% ABV after maturing in a federally bonded warehouse under government supervision. 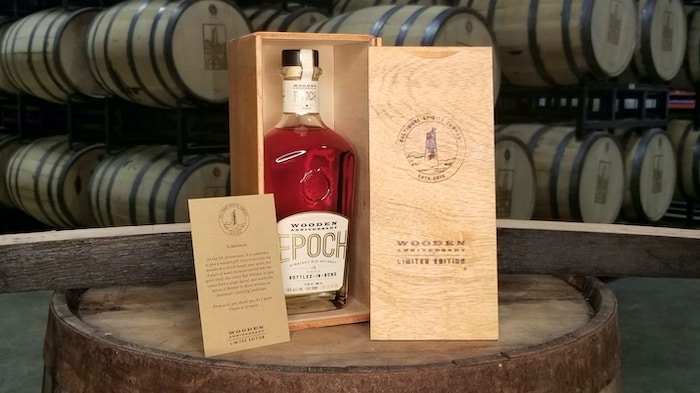 “This bottling is both a celebration of the past five years as well as a glimpse into our future,” said Baltimore Spirits Company co-founder and CEO Max Lents in a prepared statement. “It’s our oldest barrel of Epoch in the warehouse, and it will be a long time before we’re able to do this again.”

Less than 250 bottles of the Epoch Rye Wooden Anniversary Limited Edition are being made available, each sold in commemorative “Wooden Anniversary” branded boxes, along with thank-you cards signed by each of the company founders. Pricing is around $100 per 750 ml bottle, with very short official tasting notes indicating it to be “a more developed and fully mature version of Epoch Rye Whiskey with notes of candy cherry, spearmint, and caramel with an extra silky finish.”

Baltimore Spirits Company, for those unfamiliar with it, aims to restore “an industry of rye whiskey and spirits manufacturing to Maryland” in their “new, state-of-the-art distillery” by combining “modern distillation techniques with Old World craftsmanship to create expressive spirits.”