Interesting stories of the adventures of craft whiskey distillers come from all corners these days, sometimes in the more out of the way places. It is on an island in Washington State I learned of Keith Barnes and his Bainbridge Organic Distillers, the only certified organic grain-to-glass distiller in that state. Founded in 2009, Barnes, a Seattle native, is unabashedly proud of the ship he captains: they do just about everything except grow their grains (which are all locally and carefully sourced to maintain the strict organic certification from the Washington State Department of Agriculture).

With this in mind, Bainbridge is undertaking a rather unique project which we’ve written about previously. Barnes and the Bainbridge crew are set to release their much anticipated Yama whiskey, an homage to the Yama village of Bainbridge Island founded in 1883 by Japanese immigrants seeking new opportunities in America. It is the first-ever non-Japanese whiskey to be aged exclusively in hand-crafted barrels made from rare Mizunara oak harvested from the Japanese island of Hokkaido. 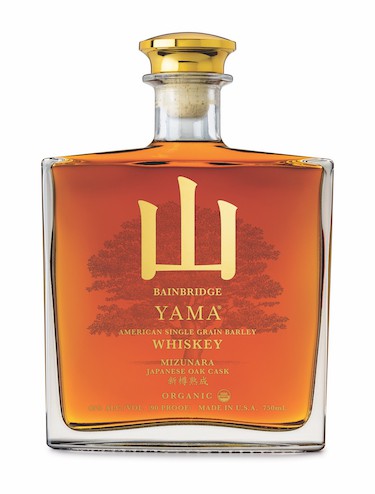 Typically, only the major Japanese distillers have access to the standing timber, therefore Barnes had quite an exercise in patience when it came to sourcing the virgin Mizunara oak that would become his barrels. The wood was purchased as lumber (selected specifically for cooperage purposes) and quarter sawn for barrel staves in Japan, then air-dry aged for three years. After that, the lumber was shipped to a family owned barrel maker in Arkansas for assembly into 10 and 15 gallon barrels.

Securing the wood in Japan was “VERY difficult, expensive and time consuming,” said Barnes. The goal was to do something “limited, unusual and special…we will only have one Yama whiskey and we have no desire to see lots of whiskies pop up claiming Mizunara creds,” for that craft belongs to the distillers of Japan. The Yama is made in the spirit of the journey that Japanese immigrants made over 100 years ago and is Bainbridge’s way to create a “legitimate and authentic connection with the journey those people made.” In no way, Barnes assured, are they trying to take anything away from those who rightly deserve the credit for Japanese whisky.

The spirit was made with Scottish yeast and 100% organic Alba and Full Pint barley grown locally in the Skagit Valley in Washington. After fermentation, the mash is double-distilled (diluted to 126.5 proof before introduction into the casks). I had the pleasure of sampling the spirit before it was ready, and it already possessed some of the most unique and sophisticated flavors I’ve experienced. Expect the distinct coconut aroma that virgin Mizunara barrels offer as well as a warm, but smooth oak finish from the rich copper spirit.

As with Yama, Bainbridge is all about doing things in special ways. Take the organic whiskey push, for example One of the reasons it’s so much harder to produce an organic whiskey, Barnes explained, is because some of the old varieties of grain used in organic agriculture don’t have yields as high as their modern counterparts, and no modern technology is used to maintain or harvest the grain. All that extra labor translates to input costs two to three times higher than the cost of conventional grain.

Bainbridge tripled its overall whiskey production in 2015, but they have yet to keep up with demand. For Barnes, however, there is no compromising the integrity of the spirit. Distillers have a responsibility to scale their business accordingly. Barnes notes, “you can tell when they miss a head or a tail cut, or when they extend the cut to get more yield.” Barnes’ favorite whiskeys are those that have something unique to say: “you can tell when it tastes like something that was really cared for.”

It’s clear that his Battle Point Organic Wheat Whiskey is just that: the 2014 Best American Wheat winner at the World Whiskies Awards is made with a “unique combination of yeasts usually employed to make Irish and Scottish whiskies, double distilled and aged for at least two years in new, No. 3 charred, American white oak barrels ranging in size from 10 to 59 gallons.”

If you happen to find yourself in Washington anytime soon, Bainbridge Organic Distillers is generally open to the public Monday through Saturday, 11 a.m. to 5 p.m., from October to April; and seven days a week from May through September.

150
Shares
384
Views
Share on FacebookShare on TwitterGet Our Newsletter
Get The Glenlivet 18 Year Old at ReserveBar. Shop now!