Bad Dog Distillery A Good Dog When It Comes To Whiskey

Bad Dog Distillery A Good Dog When It Comes To Whiskey 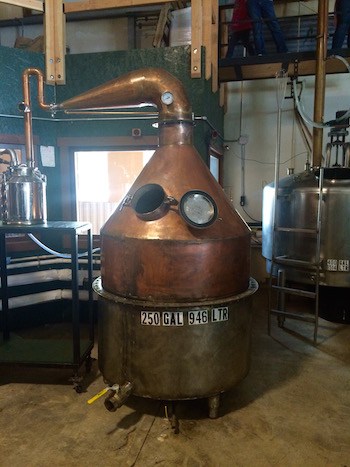 There are plenty of craft distilleries making great whiskey these days, but few boast the amazing story behind Bad Dog. Located a stone’s throw from the Arlington Municipal Airport in Washington (about 45 minutes north of Seattle), Dave and Shelly McGlothern built their very own distillery. Though moonshining has been in Dave’s wheelhouse a long time (*cough* high school), he decided to turn the hobby into a business and they opened in January of this year.

A horseshoer by trade, Dave designed and built Bad Dog in a warehouse that once was stacked to the ceiling with supplies for a local landslide recovery effort during which he also volunteered his time clearing and sifting through debris on his tractor.

Inspired by their Red English Labrador Retriever, Hank, Bad Dog is producing a variety of spirits that include its corn-based whiskey (90 Proof), a young and surprisingly smooth American style spirit with caramel notes that picks up just the right amount of toasted oak from the barrel. I happened to stop by while Dave and a few friends and family were filling up barrels, but he and Shelley were kind enough to show me around. The tasting room opens right into the distilling space where you’ll find Hank laying on his bed, oak barrels, a few recliners and the belle of the ball: Dave’s handcrafted copper still that he made himself.

Knowing he wanted to use a more traditional still, Dave figured building his own was the only option. It uses a single or double thumper and has an external jacketed cooling worm. Even so, Shelly told me, they have to use their “hillbilly” still as a supplement. When I asked what made the whiskey so smooth, she said it was a matter of using quality local ingredients and painstakingly watching the temperature to make sure no yeast dies off in the process. Additionally, the thumpers lend to an extra distillation: when done the traditional way properly, you get a smooth finish in every batch.

The McGlotherns also have a vodka still that doubles as a cooker (a growing pain, for now) so production can meet demand. And, as if they weren’t already the handiest distillers I’ve met, they’re figuring out a system to recycle used water using a giant storage mechanism by the name of ‘Miss Piggy.’

It’s also worth noting that Bad Dog make an all-natural cinnamon whiskey using Shelly’s recipe, so come the colder months and tailgating season, be sure to drop by Bad Dog for a nice warm up.