Just a few years ago, if someone said “single malt,” it was automatically assumed they were referring to whisky from Scotland, or possibly Ireland and Japan. Though bourbon and rye had seen a massive resurgence, only a small number of craft distillers in the U.S. were trying their hand at producing local single malts. For one thing, the very reason bourbon, rye and other American whiskies had suddenly become so huge was because they weren’t single malts. “‘Merica!” Why be like them when we’re so good at what we already do?

However, as whiskey aficionados embraced craft whiskey, more distillers began to experiment with other types of whiskey-making, playing with funkier grains in their mash bills, testing out different cask finishes, and pushing the boundaries of traditional American whiskey distilling. The stage was set to introduce a new entry into the world of single malt whisky: American single malt.

American single malt differs from Scottish, Irish, or Japanese single malt in that it is not required to be made from 100% malted barley, but must contain at least 51% with the allowance of other grains. This gives distillers some creative license, though most choose to go with a high or complete malted barley mash bill.

One of the first mavericks to attempt an American single malt style is Steve McCarthy of Oregon’s Clear Creek distillery, who first released McCarthy’s Oregon Single Malt in 1996, way ahead of the craft wave. Inspired by a trip to Scotland, McCarthy sourced peat-malted barley from Scotland, had it fermented by local Widmer Brothers Brewing, then distilled it in a pot still using a one-pass process with large cuts of the heads and tails, and aged it for around three years in Oregon oak. The whiskey became a huge cult hit and the recipe continues to be a favorite, even after Clear Creek was acquired by Hood River Distillers in 2014. 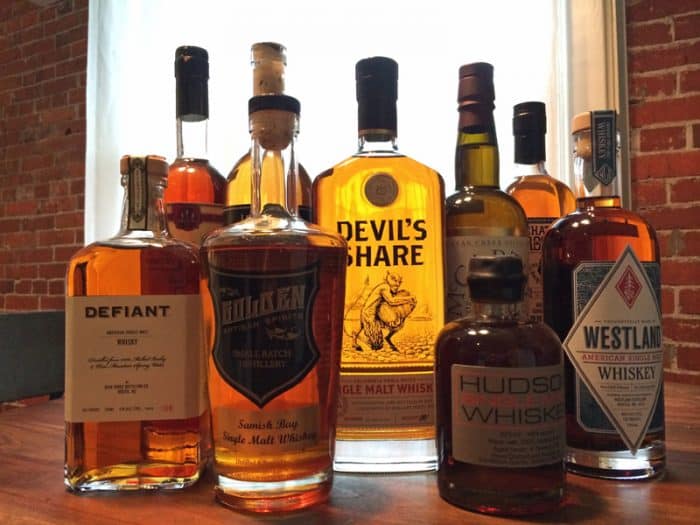 Another pioneering American Single Malt producer is Northern California’s St. George Spirits, whose then-new distiller, Lance Winters, produced Lot 1 Single Malt whiskey in 1997. What about a single malt that isn’t made of barley, but still technically follows the other rules? Enter Old Potrero out of San Francisco’s Anchor Distilling, made from 100% malted rye that is aged in toasted barrels and a combination of new and used oak.

It was a few years until America caught domestic single malt fever, but by 2007 and 2008 it became a bonafide movement in both peated and unpeated styles, though in somewhat unlikely places. Kentucky was still happily riding the bourbon train, but elsewhere distilleries were beginning to jump on the bandwagon. With the success of its Hudson Baby Bourbon, Tuthilltown Distillery soon came out with a single malt. Copper Fox distillery in Virginia released their first versions of Wasmund’s single malt. Soon another Hudson Valley distillery, Hillrock, took the farm to glass route, malting their own farm-grown barley in-house under the direction of distiller Dave Pickerell for their Estate Single Malt. Meanwhile, in Texas, then-master distiller Chip Tate released Balcones Single Malt, which is aged in a variety of barrel sizes before marrying in a large cask.

Now it’s almost expected that craft distillers who produce a variety of whiskey styles and other spirits will not only offer a rye, but tinker with American single malt. Other producers include Illinois’ Few Spirits, Nashville’s Corsair, Portland’s House Spirits, Brooklyn’s Van Brunt Stillhouse, and Santa Fe’s Colkegan. One of the leaders of the newest wave is Westland Distillery in Washington state, who have chosen to hone their vision on single malts. Their primary lineup includes both a peated and unpeated style, but they also experiment with sherry cask finishes and limited bottlings of single casks.

Where has Kentucky been all this time? It turns out they were just waiting for their moment, with recent releases such as 8-year-old Parker’s Heritage single malt from Heaven Hill, and Woodford Reserve’s Classic Collection of malts.

Ready to try a few American single malts? They’re fun, flirtatious, and easy to find now. Plus they don’t take awful mirror bathroom selfies and won’t stand you up. Sure is a great time to be single!