Editor’s Note: This is the second in a series of articles on wood, casks, and maturation by scientist Paul Hughes of Oregon State University.

In my previous article, I mentioned that casks consisted of a double-arch structure, which made them especially strong. Here I want to explore the features of cask geometry that have made it such a suitable vessel for whiskey and other liquids over a period of two millennia.

The structure of the cask is thought to have evolved from ancient methods used to produce buckets and tanks. Egyptian illustrations dating from tombs dated to before 2000 BCE clearly indicate wood as a material choice for the storage of liquids and solids. It seems, though, that cooperage and the cask was popularized, if not developed, during the latter stages of the Roman Empire, around 200 AD.

Casks are often referred to as being of a double-arch structure. This refers to the fact that the cask is curved in two planes. So, envisage a cask standing on its end. The cask is arched from top to bottom and around the body of the cask. A triple arch would be ball- or egg-shaped. 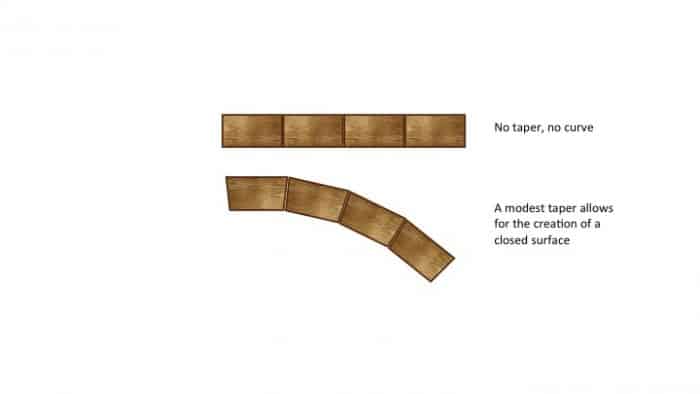 This gives the cask strength. Stress on the body of the cask forces the staves to push against each other, while the steel hoops help the casks to resist distortion and internal stress from the mass of the contained spirit or any stress on the ends. This is important, with some casks being palletized up to six casks high.

Additionally, even full casks are relatively easy to move because of their double-arch structure. Thus the liquid can be moved “out of the way” to mature. It can also be taken for finishing from the warehouse, rather than having to use hoses to transfer the matured spirit, or even transfer spirit into another vessel for transportation. This facilitates any blending operation, as disparate casks can be readily co-located for finishing.

The staves around the body of the cask are tapered, to allow for the creation of a closed surface, so a cross-section across a stave resembles a trapezium, albeit with slightly curved sides. This taper is modest, a mere 6° for a cask made of 30 equal-width staves.

Commonly, casks of around 200 liters (American Standard Barrels, or ASBs) are sent to Scotland from the U.S., where they are expanded with additional staves to around 250 liters (hogsheads). This requires the insertion of three or four similar width staves and, in principle, a modest adjustment of the taper to 5.5° for full surface stave contact.

We can think of this in two ways. Firstly, imagine a range of casks where the body curvature, height, and width are in fixed proportions. In that case, the relative surface area to volume ratios for 30, 200, 250, and 500 liter casks are around 1.9, 1.0, 0.9, and 0.7, respectively, so maturation might be expected to be slower in larger casks, all other parameters in the maturation being equal.

Secondly, imagine a range of casks, all of the same volume, but with different height to radius volumes. The surface area to volume ratio is insensitive if the ratio of height to cask radius is between 1 and 6. Bearing in mind that an ASB typically has a height to radius ratio of 4, it seems normal variations in casks – fat vs thin – have little apparent effect.

Nevertheless, for very short, fat casks, say with a radius twice the height (in effect an oak tank), the surface area to volume starts to increase. Such construction, though, would make moving the liquid more difficult.

One final point about the size of casks. Oxygen from the air is an essential component of whisky maturation. In larger casks, it will take longer for oxygen to diffuse into the center of the cask, if indeed it does not get reacted away in the spirit beforehand.

So the key aspect to affecting rates of maturation is cask size rather than short vs tall. A tall cask, though, should allow for better oxygen penetration into the spirit, and therefore influence the balance between oxidation and extraction. Suffice to say there’s a lot to learn still about cask geometry, wood, and maturation!