So, I’m not much of a “desert cocktail” person. I like things to be really balanced and generally on the sour/bitter side. There are two exceptions to this rule, the espresso martini, and the Irish Coffee from Erin Rose in New Orleans. Yeah, I know, it’s super specific, but that’s the kinda gal I am. The Irish Coffee at Erin Rose is not your standard Irish Coffee. It’s a frozen, sweet treat that refreshes you to your core, even in the middle of the oppressive New Orleans heat.

The first time I had this nectar of the gods, I was in New Orleans for my first Tales of the Cocktail, the annual celebration of all things booze and cocktails. Tales is a huge industry and enthusiast event that takes over the French Quarter for about 5 days every July. Yeah, you heard that right! The convention happens in New Orleans, IN JULY! It’s arguably the hottest time of year there, and it is utterly miserable. Even if you’re someone that handles the heat and humidity well, there just isn’t any getting used to going from arctic levels of air conditioning indoors to sweltering sauna-like heat outside over and over again. It’s a serious shock to the body.

As this was my first Tales, I didn’t know the city that well. I had no idea where all the “cool kids” hang in between seminars and such. I was still relatively new to the industry and didn’t know that many people there, so I mostly stuck to my educational seminars and then went home to sleep after being trapped in conference rooms for 8 hours a day. On a particularly hot and sweaty afternoon, I found myself with a little more free time that usual, so I decided to wander around the Quarter a bit. I rounded the corner onto Conti Street and spotted some bartenders I recognized from NYC. I sauntered up to what looked like a pretty average hole-in-the-wall spot. They proceeded to extol the virtues of the Irish Coffee, which I snubbed my nose at because I generally hate sweet drinks. But they eventually won me over by offering me a taste of theirs and man was I glad I listened to them. It was so cold and so delicious and the caffeine gave me a nice little jolt of much-needed energy. I went from feeling overheated and ready to do murders, to feeling refreshed and energized. It’s a miracle cure, and I’m here to share my version of it with you on this St. Patty’s Day!

The real Erin Rose recipe is a secret, but suffice it to say, it involves Irish whiskey, coffee, simple syrup, and vanilla ice cream for sure. I took the basic elements and added a little twist of my own in the form of Green Chartreuse because it adds a fun herbal element and I love it so! I wanted this to look a bit like the old Shamrock Shakes from McDonald’s, so I added some green food coloring, because isn’t drinking something green all anyone wants for St. Patty’s Day? Hope you enjoy this fun twist on a New Orleans classic! 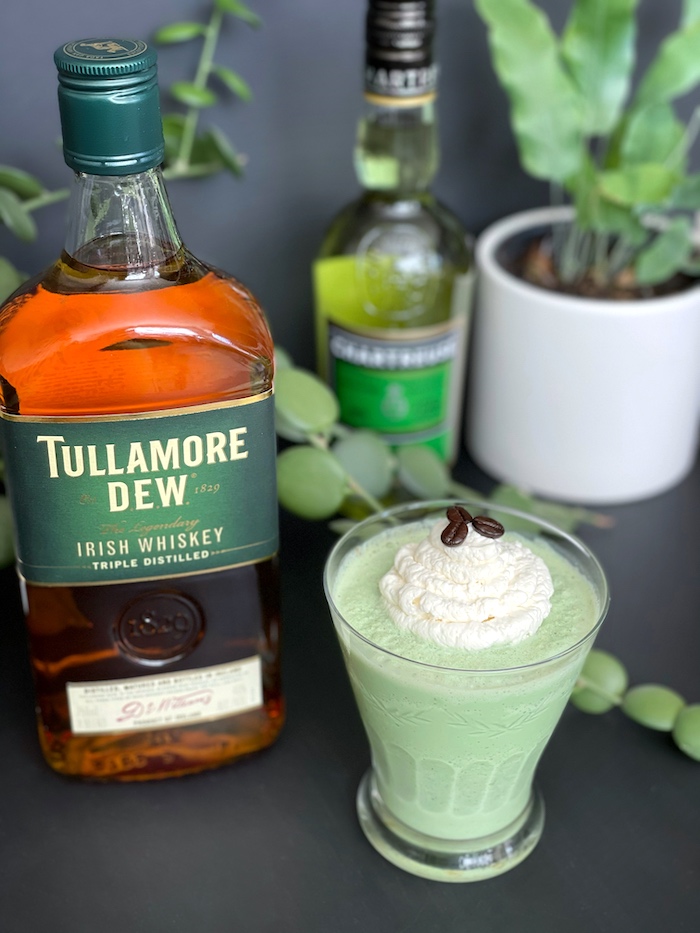 Combine ice cream, ice cubes, coffee, food coloring, and liquor in a blender. Puree on high until ice is broken down and mixture is the consistency of a milkshake. Pour into a large glass and garnish with whipped cream and coffee beans.

*For a more coffee-forward flavor you can add instant coffee grounds to your mix. I did this with some Nescafé for an extra coffee kick.