Editor’s Note: This is the fifth in a nine part series chronicling the life of James Crow, an extremely important figure in the history of American whiskey. A chemist originally from Scotland, he is credited by some as having invented the sour mash process. Watch this time slot on Thursdays (11am Pacific Time) for the other articles.

James Crow would have meticulously documented his work; however, no diaries, notes or distilling manuals have been handed down or catalogued for posterity. The only way to reconstruct his methodologies is from testimony and secondary sources by distillers he trained, who claimed faithfully to copy Crow’s formulas and methods. The man mostly responsible for the dissemination of Crow’s methods was his apprentice at the Oscar Pepper distillery, William Mitchell.

Mitchell worked with Crow from 1848 and when Crow left the distillery, whereupon Mitchell replaced Crow as the head distiller, continuing to replicate Crow’s whiskey techniques at the Oscar Pepper distillery until 1869. That year, Mitchell moved to run the Old Crow distillery continuing to teach his assistants the Crow’s ways. They, in turn, trained others, and Crow’s sour mash baton passed on.

As the baton was handed to successive distillers, they kept a code of silence on many parts of the process. In court proceedings distillers imparted knowledge of the Crow methods but refused to divulge some secrets, treating them as the intellectual property of the distilleries where they worked. Close examination reveals there was never a fixed formula or Crow methodology, by either Crow or those who followed him. It was a flexible framework that changed with experimentation, adjusted to production variables, from grain, climate, sour mash dosages, to changing still technologies and other determinations. 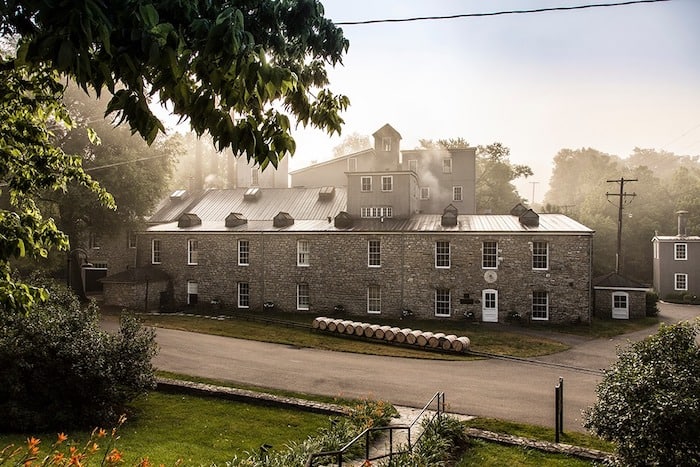 Adding to this opaqueness are the undocumented details on the specifications for items such as the mash tubs (capacities, utilization) and the still designs (size, shapes) at the Pepper distillery. And later at the new larger-scale ‘pure copper’ distilleries built after the Civil War to replicate his ideas. Incremental changes continuously occurred with improvements in distilling apparatuses, auxiliary machinery and advances in raw resources, such as grain varieties and yeast strains.

Further changes to the sour mash backset procedures claimed to increase the alcoholic yield from 3.5 gallons per bushel in Crow’s day to 4.2 gallons in the 1890s. The elusive grain recipe was never a fixed formula, as Crow mashed with varying percentages, due to seasonal changes affecting the different grains. It was common practice for most of the major distilleries to operate grain bill tolerances of up to 6% variance into the mid-20th century. The fifteen years at Oscar Pepper’s relatively modern Kentucky distillery, also benefitted from years spent contract distilling to farmers around the Glenn’s Creek district, where he honed his local knowledge and practical skills, in preparation for his seminal work.

Crow applied empirical study to his sour mash whiskey procedures. Anecdotal narratives indicate every step in production was systematically observed, measured and tested. Foremost to his investigations in whiskey-making he established vigorous standards and policies for distillery cleanliness and hygienic practices in all aspects of the distillery’s operations. Poor cleanliness was the unseen hobgoblins of many distilleries. Distillers had only a rudimentary understanding and lax observance to cleanliness and sanitation, not recognizing the systemic or incidental contamination by microbes as the greatest threat to both alcoholic yields and spirit flavor.

In Scotland, Crow’s training would require after each batch was distilled, equipment was washed and sanitized. Wooden vessels scrubbed down with caustic lime to prevent infection in cell fibers of the wood grain and residual calcium oxalate, or beer stone that harbored bacteria. Stills scoured and worms washed to remove sediment and oil.

In Kentucky’s climate, this attitude to cleanliness would require extra vigilance. He instructed the corn kernels were brushed clean before cooking; two decades later, Old Crow was one the first distilleries to install mechanical brushes to maintain this procedure. From grain to barrel, tub to still, every surface and container needed to be spotless to stop the hobgoblins ruin the biological manufacture of whiskey. Crow’s advice on the new distillery construction, likely included sloping floors and drainage to remove excess water and effluent. Spacious rooms were ventilated and protected by solid stone fireproof walls, improving hygiene, safety and product quality.

Crow’s instruments and how he used them were his secret weapons too, invaluable tools to measure, analyze and test experiments. Other distilleries had similar measurement tools employing hydrometers and saccharometers, thermometers and barometers, to weights and scales, but few had the technical calibre of Crow’s device. Nor did they have the professional curiosity and scientific training of an experienced distiller transitioning the art of whiskey into the science of whiskey.

Crow’s work and resources at Oscar Pepper farm was a product of the antebellum world and Kentucky’s agrarian economy. Before investigating Crow’s specific resources and distilling methods, the economics of Oscar Pepper running a relatively large farm enterprise and operating a sizeable distillery in Woodford County was set against the spectre of a slave economy. Farming and distilling were seasonal cycles determined by Kentucky’s agricultural economy and environmental conditions often dictated by Nature. Environmental conditions were a farm’s topographical location, soil fertility and water, weather and climate, pests and disease, the size of landholding and access to markets; all affected the farm’s agricultural output and sales.

Another constraint on productivity was labor resources and the limited mechanization, usually only a single disc plough and wagons for transport. Kentucky farms’ productivity and profitability became reliant on slave labor for scoping of their manual activities. Pepper’s dozen male slaves undertook strenuous and tedious manual tasks, and the eleven female slaves were responsible for assisting in domestic duties. Without these two dozen extra hands, the farm’s agricultural and distilling output would have been relatively modest. Every task on the farm involved ‘hands-on’, from ploughing by a draft animal, planting and harvesting, rotating different cereal crops to nature’s rhythms.

Seasonal sowing of rye, barley and wheat began in the fall; in the spring it was harvesting, threshing and winnowing. Corn was planted in May, weeded through summer and harvested in October, cribbed and later shelled, signalling the start of the distilling season. Grain was first ground slowly by the waterwheel-driven millstones; the sacks of flour meal lugged to the distillery’s mash room. Ground grain meal was cooked and tediously mashed, usually one bushel at a time in a small tub. Each tub needed manual stirring to ensure cooked evenness and prevent the meal balling.

Buckets took the mash to fermenters, or if fermented in the mashing tub, carried to the still. Each charge of the still had fires set, and after several hours of monitoring the still; the low wines were collected and sent for the spirit run in the doubling still. The high wines were diluted and filled into barrels and rolled to a warehouse for storage. Buckets of slops were carried to pens to feed the hogs and cattle. When not attending farming and distilling the livestock required husbandry, farm buildings and fences repaired, gardens and orchards needed tending, and domestic duties ensured the household was fed and served.

While the price of slaves varied by gender, age and health, a strong young male equated to more than five paid laborers, when amortized over a decade or score this was a considerable saving. The abolition of slavery after the Confederacy’s defeat explains why by 1870 there were only 141 registered grain distilleries in operation in Kentucky, and 95 employed bourbon steam stills; in 1871 this fell to 128 in operation. Whiskey distilling had made a quantum move from a cottage industry by farmer distillers into an industrial enterprise increasingly using mechanization to replace labor.

In part 6 next week we take a look at Crow’s formulas and methodologies.

Chris Middleton is from the whisky industry and writes about whiskey too. After an international career in the whiskey industry he has an insider’s perspective on the history, production, product innovation and cultural marketing of whisky from manufacturing countries of Scotland, Ireland, to North America, and his home in Australia....