Tamworth Distilling out of New Hampshire is known for doing whiskeys now and again which push certain boundaries around what one might normally consider in the bottle. A case in point to this was its Eau De Musc Castoreum Flavored (oil extract from the castor gland of the North American beaver) Whiskey, among other offbeat offerings. It is now back with a new rye whiskey influenced by maple tapped from so called “graveside maple trees.”

The new Tamworth Distilling Graverobber Unholy Rye, according to those behind it, is a three year old rye whiskey that’s been infused with maple syrup tapped from colonial era maple trees with roots that “twist and grow throughout the unmarked gravesite of Great Hill Farm.” Hence the name graveside maple trees. It is said that it is historically taboo in New England to tap these types of trees for risk of “disturbing the dead.”

“Graverobber is an Unholy Rye Whiskey infused with maple syrup tapped from Graveside Maple Trees,” said the distillery in a prepared statement. “On our property is a malignant old maple whose roots burrow deep into the nearby unmarked Colonial Era graveyard. What would happen if we tapped some of this sinister sap and added it to our whiskey? Spicy yet sweet, evil yet divine, the life of the Graverobber begins…” 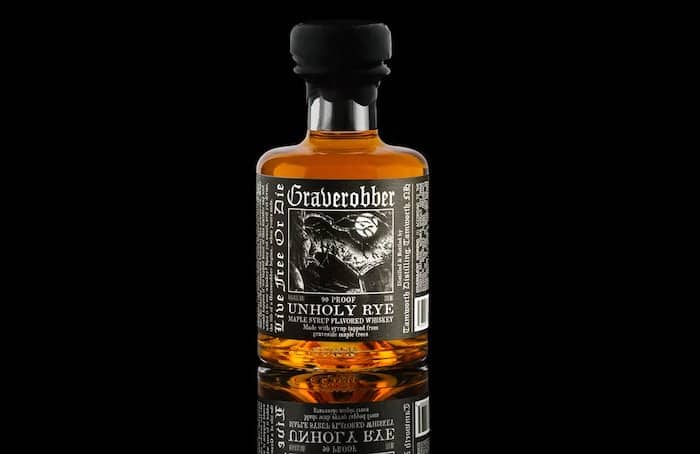 Graverobber Unholy Rye, bottled at 90 proof, is a limited edition whiskey that’s pricing for around $65. Official tasting notes for it indicate it “takes on a layered profile full of charred oak and burnt sugar. Blended with sinister cemetery syrup, with aromas of cinnamon and dried orange peel, the exhale is followed by the sensation of rye cracker.

“The taste is full bodied; however, the sweet yet unholy maple soothes the burn from the peppery rye and gives way to a warm, long finish that channels the dead and creates a dangerously drinkable intoxicant.”

22
Shares
454
Views
Share on FacebookShare on TwitterGet Our Newsletter
Cheers to the Dads! Personalize a bottle of his favorite whiskey to create a modern gift for the modern man. Use code: FATHERSDAY20 for $20 off your next order of $100 or more at ReserveBar