Editor’s Note: These whiskies were provided to us as a review sample by the Virginia Distillery Co. This in no way, per our editorial policies, influenced the final outcome of this review. It should also be noted that by clicking the buy link towards the bottom of this review our site receives a small referral payment which helps to support, but not influence, our editorial and other costs.

In the emerging industry of American Single Malt Whiskey, there is no shortage of distillers aiming to make their mark. This class of whiskey appeals to creative innovators who delight in Old World traditions while taking every opportunity to put their own spin on the classics.

Virginia Distillery Co. of Lovingston, Virginia is one of the highest profile American single malt distilleries to appear on the scene. In the summer of 2020, right when we all needed a drink, Virginia Distillery Co. released the inaugural batch of its flagship single malt whisky Courage & Conviction. (In a nod to tradition, they use the “whisky” spelling, even though the whisky is distilled in the United States.)

Courage & Conviction is made by blending a trio of cask types: Bourbon, Sherry, and Cuvée. In 2021 the distillery released individual bottlings of each. Tasting the individual casks is a unique experience which invites tasters to intuit how each component contributes to the finished product.

The makers guide us with some official tasting notes and information about the casks themselves. The Bourbon Cask malt is aged in (you guessed it) former bourbon casks, and adds notes of vanilla, caramel, butterscotch and toffee. For the Sherry Cask, a combination of Fino, Oloroso, and Pedro Ximénez gives the whiskey notes of cherry, fig, golden raisin and caramelized plum. Cuvée Cask is Virginia Distillery Co’s name for the an innovative “STR” (shave, toast, re-char) cask that once held premium European red wine. The rejuvenation process energizes the wood sugars, bringing forward notes of raspberry, cherry, brown sugar, cocoa and baking spice.

Virginia Distillery Co. offers virtual tastings for anyone interested in an immersive tasting experience from home. Courage & Conviction ships nationwide for $80 per 750 ml bottle. Cask offerings are priced slightly higher at $85 each. 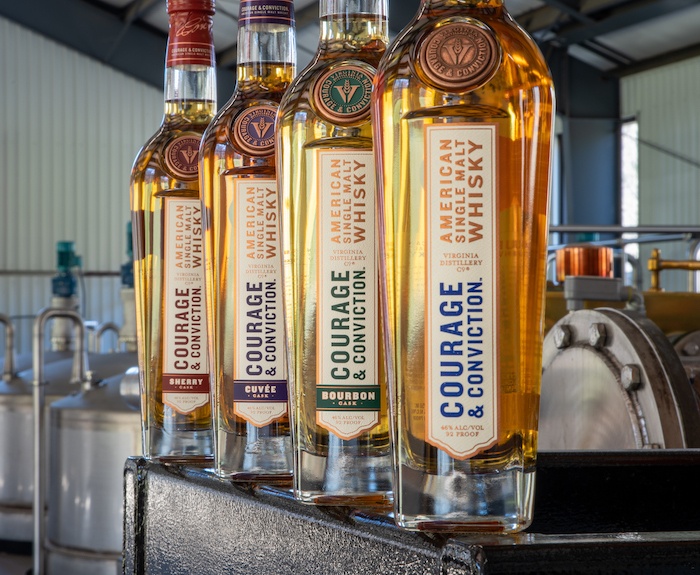 Nose: The nose is complex and inviting. There are strong overtones of toffee and raw honey with the undercurrent of bubblegum, raisin and jasmine.

Palate: You are certainly going to taste those sherry and red wine casks. This is fruity with cherry, plum, and blueberry. The mid palate softens with some eggy custard and caramel before vanishing into a lingering finish of leather with the tingle of fresh cloves.

Appearance: Blonde. This is visibly identical to Courage & Conviction

Nose: The nose is fairly flat but has the notes of butterscotch and glazed donut. The hints of baking spices, anise, and cinnamon are quite subtle here but detectable.

Palate: The warmth of oak is forward on the palate followed by the light sweetness of vanilla pudding, marshmallow and buttercream frosting. The finish is lengthy and pleasantly warming, with the heat of cinnamon and chewy ginger candies.

Appearance: The color of the Cuvée Cask Whisky is bronze. This is significantly darker in appearance than both the flagship and Bourbon Cask Courage & Conviction.

Nose: The nose has a heaviness to it. It’s thick with brown sugar that is balanced out by tart citrus notes.

Palate: The sweetness of the nose is carried over into the palate which coats the mouth with maple syrup and honey butter. The finish is over in a flash. This is really chocolatey, like the brown sprinkles on a cupcake, and incredibly smooth on the palate.

Nose: The nose is a combination of fruit and smoke, like when someone puts peaches on the grill. Plum is the most notable profile in this all around jammy nose.

Palate: The palate opens with red raspberry coulis, fig and firewood. There is an earthiness to each sip like hay toasting in the sun. Spices turn up in the long finish that is rich with black pepper and nutmeg.

Overall this was a solid tasting experience with a complex variety of flavor profiles in each bottle. For me the star of this set is the Cuvée cask. It is set apart by a surprisingly heavy, sweetly balanced palate and an appearance that is significantly darker in color than the rest. Courage & Conviction Single Malt Whisky on its own is a fantastic American Single Malt that I would gladly sip at the end of a long day. If you are not able to try each but are looking for something unique in the world of American single malts, I recommend getting your hands on the Virginia Distillery Co. Courage & Conviction Cuvée Cask.