Editor’s Note: These whiskies were provided to us as review samples by That Boutique-y Whisky Company. This in no way, per our editorial policies, influenced the final outcome of this review. It should also be noted that by clicking the buy links throughout this article our site receives a small referral payment which helps to support, but not influence, our editorial and other costs.

TBWC has seriously so many whiskies available – limited edition releases from award-winning distilleries like Heaven Hill, Glenlivet, Glen Moray, and too many others to count. They’ve released whiskies as old as 50 years, and even offered a 33 year aged whisky from Port Ellen, which closed in 1983.

You can find blends of single malt, single grain, bourbon, corn whisky, and pretty much every kind of whisky from around the world – all packaged with punchy illustrated labels featuring insights into history or an inside joke or two. Some producers originally didn’t want to allow them to bottle their whisky because it was so far out of the norm. They didn’t ‘get it.’

Even though their branding was a little unorthodox, TWBC was bottling for whisky connoisseurs from the beginning. The company was launched in 2012 by Atom Brands, the creator of Master of Malt, an independent online whisky distributor. The two endeavors easily went hand in hand, and now TBWC has established itself as one of the most recognizable independent bottlers around.

They offer more affordable bottles in the $40-$150 range and they also have released bottles that cost upwards of $1000, so there seems to be something for every whisky enthusiast. It’s difficult to find their products in the United States, but they do distribute their products through a company called Winebow. If you’re not in the United States they have several other options. 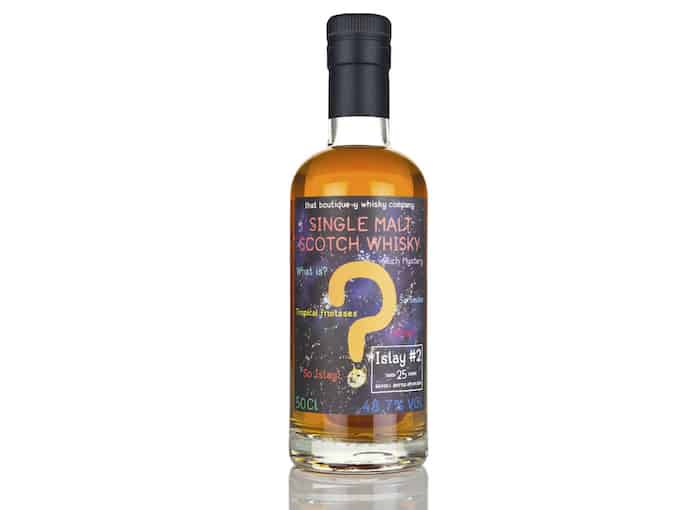 Vital Stats: This inaugural release of Three Ships from TBWC, distilled in South Africa at the James Sedgewick Distillery, marks the first South African release from TBWC. It also happens to be the first ever independently bottled release from Three Ships. The whisky is aged for 6 years in both American Oak and PX casks, which stands for Pedro Ximenez, a type of sherry.

The label features a stylishly illustrated version of master distiller Andy Watts filling a whisky barrel with one hand and holding a cricket bat in the other. Three Ships 6 Year-Old Single Malt Whisky is 53.7% abv and costs around $80 per bottle.

Nose: At first the scent is light and grassy. As it opens up, more lightly sweet vanilla and notes of fresh herbs are able to bloom.

Palate: Slightly sweet on the front, notes of wood and vanilla. A little spice in the body. It’s perfectly peppery and herbaceous. The finish is long and bitter, and lingers with earth and leather. Dark caocao nibs, licorice and dates act as subtle background notes. It’s got a lighter flavor, and the mouthfeel is also light and oily.

Final Thoughts: The flavors are nice, light and balanced. I am not a huge fan of bitter flavors, but the sweetness on the front was almost enough to even them out.

Vital Stats: This 12 year aged Glen Moray Single Malt Scotch Whisky is a rare batch. There were only 213 bottles released of this whisky hailing from Glen Moray Distillery, located in the Speyside region in Scotland. The well-known distillery has been producing whisky since 1897.

This label features illustrations of a flooded distillery, referencing a flood in 2002 that threatened to destroy hundreds of Glen Moray casks after the banks of a nearby river burst. The abv is 48.5%.

Appearance: Very light in color. It’s a pale sunflower yellow, almost clear. The legs aren’t sticky, they leave a light peppering of droplets up the side of the glass.

Nose: Grassy and woody, with notes of lemon peel and caramel. As it opens, ripe plantain and vanilla add sweetness, though the overall aroma is very light and buttery. At first the scent was more muted, and became more aromatic as it opened.

Palate: Sweet and oily on the front, notes of freshly cut grass, followed by passionfruit and spices. Banana slices in cheerios and vanilla frosting makes up the body. It’s straightforward, but delicate. There’s a little bit of salt and spice on the finish, plus other notes of angel food cake, clove and allspice to round out this soft and silky whisky.

Final Thoughts: I liked that it was easy to sip on. The light mouthfeel and subtle tropical flavors were very complimentary, and spice backbone held the flavors together.

Vital Stats: This release is independently bottled by TBWC, and its contents are pretty much a mystery. The only details they’ve revealed are that it’s aged for 25 years and it comes from one of only eight distilleries on the Isle of Islay.

The label fittingly features a giant yellow question mark over a purple background. Islay No. 2, 25 year aged single malt Scotch whisky is 48.75% abv and is sold for around $160.

Appearance: Legs are oily and pepper the sides of the glass in little droplets. It’s lightly golden like the tuscan sun rising over the beaches of Italy.

Palate: Mouthfeel is silky and oily, and flavors open with soft sweetness, charred wood and caramel. Figs and tannins with juicy notes of merlot make up the body, and a slight smokiness carries through from start to finish. Nuttiness and frothy latte mellow out into a long finish.

Final Thoughts: The flavors are bold and rich. There’s a clear beginning, middle and end to this whisky, a storybook ending with a happily ever after.

Vital Stats: This single malt Scotch whisky was distilled by Benrinnes and aged 17 years before TBWC bottled it at 47.6%abv it for our sipping pleasure.  Benrinnes has been around sine the 1800s, and despite having some terrible luck throughout the century, the brand persisted into the 21st century. The distillery is located in the Speyside region of Scotland. This bottle retails for $70.

Palate: The front is soft, like banana pancakes and more nuts shine through. Pistachio, walnut, hazelnut and almond cookies. The body brings in a slow wave of spice, with charred oak and woodsy flavors. The finish is long, tingly and has bits of lavender and leather, adding more depth.

Final Thoughts: It’s tasty and balanced, a fine example of Scotch single malt. It’s light enough and punchy enough to stand up to bold flavors or even a cigar. It’s also delicate enough that you could sip it during a light dinner with fish or a salad. I didn’t have any strong feelings about it.

Vital Stats: Once again, the contents of this bottle remain shrouded in mystery. The only scrap of detail we have is that it’s single malt and comes from an unnamed distillery in Ireland. The label is bright orange with a floating horse head surrounded by sugar cubes and a psychedelic rainbow. Batch 4 is 47.6% abv, and costs about $60 per bottle.

Appearance: Pale, dusty yellow in color with a shiny texture. Legs are thin.

Palate: The fruity notes don’t carry into the flavor. A whirlwind of caramel and dark chocolate sort of sweeps over everything, in a good way. Deeper flavors of clove, cinnamon and a teeny tiny hint of root beer. The finish carries through for a bit with deep flavors of chocolate and wood. The mouthfeel is velvety, almost creamy.

Final Thoughts: This was by far my favorite one of the batch of whiskies included here. I loved the deep, full-bodied flavors – a stark contrast to the other, much lighter single malt expressions from Scotland and South Africa. It’s rich enough to drink it for dessert.