Editor’s Note: These whiskies were provided to us as review samples by PM Spirits. This in no way, per our editorial policies, influenced the final outcome of this review. It should also be noted that by clicking the buy links in this article our site receives a small referral payment which helps to support, but not influence, our editorial and other costs.

It would seem to be a reasonable, albeit fantastical, aspiration for a whiskey lover; should the means and opportunity present itself, selecting and owning a personally chosen cask from a distillery that you have come to find delicious during your whiskey journey. This might seem like an elaborate dream today, but this was more or less how whiskey got its start as a commodity and many whiskey producers have programs in place as  an option for consumers.  Whether as a way for a consumer  to feel a more personal connection to the brand, or a way for a new distillery to raise funds while the whiskey is aging, it is a large upfront investment and a lot more involved than just picking out a barrel.

These complications appear to have worked in the favor of PM Spirits. The brand has built a business curating and importing limited release spirits into the U.S., and in 2012 they were able to procure two casks of single malt Scotch whisky from someone who found that getting casks from Scotland to the U.S. wasn’t as easy as anticipated.

PM Spirits‘ operations are rooted in Cognac, France with both product and location. Those two casks were distilled on the isle of Arran in 1996 and then aged in Scotland until the summer of 2012. They were then moved to France, where they aged further in Cognac casks until their bottling in 2020, resulting in a 24 year old single malt whisky.

Why stop there? More whisky was subsequently obtained from the isle of Arran. In 2011, new spirit began to age in a single 112.5 liter oak barrel hand built from oak that grew in France’s Reno-Valdieu forest- one of only four such casks in the world. It was then bottled after being aged for eight years.

With all that in mind, let us take an individual look at these expressions in chronological order. It should be noted as well the age statements on the bottles at retail are a year off – this is a result in a delay in bottling, according to PM Spirits. 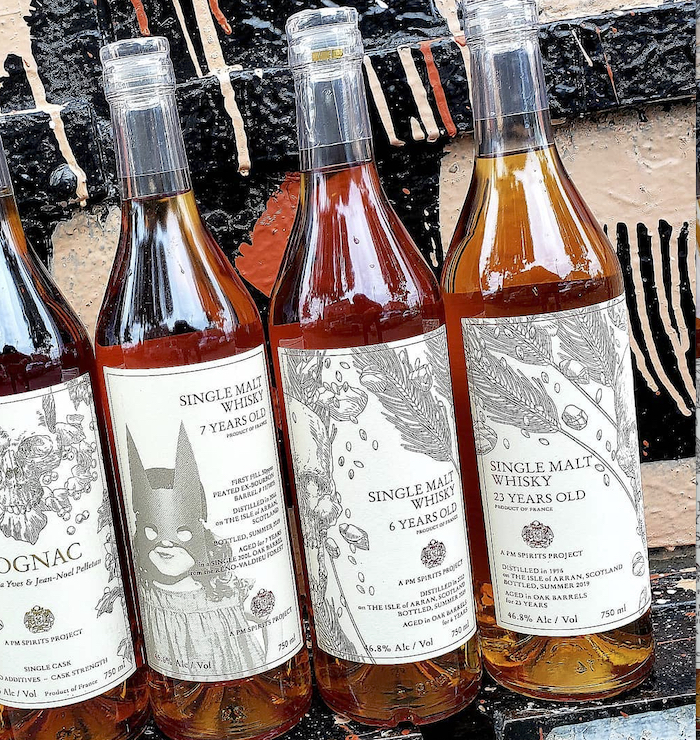 Appearance: Clear with pale intensity and  golden color. Viscous in the glass with slow forming legs.

Nose: The smoke of the peat is the first detectable aroma, then an orchard quality (particularly Granny Smith apple), giving way to mint at the end.

Palate: The cask influence is very present and a typical for this relatively young Scotch. The heat of the full strength ex-bourbon is right upfront, then this gives way to the sweetness of the ex-sherry, and the smoke of the peated comes in and gives it a mint chocolate finish.

Appearance: Clear with a pale even color of  amber. Seems to have some body in the glass.

Nose: Faint wisps of smoke and floral in the bouquet. Reminiscent of the evening.

Palate: A good balance of heat, botanic and smoke. There is an astringency present attesting to the new wood, but it compliments well to rest of the finish.

Appearance: Translucent gold. Catches the light well and forms slow developing legs on the side of the glass.

Nose: An earthy sensation indicative of its time spent aging presents first. Leather, tobacco, and banana develop as the aroma opens up.

Palate: Comes on softer than expected with a chewy, full mouthfeel. Astringency that gives way to a creamy custard like finish. An interesting intersection of the two worlds.

Final Thoughts: I always appreciate an outside the box approach and a unique way of thinking, and that is what these expressions are. They are one of a kind, rare, and worth partaking if the chance arose. They can present as a little off balance or a little too pronounced in one aspect, but I look forward to seeing what they release next in the single malt category.

7
Shares
2.3k
Views
Share on FacebookShare on TwitterGet Our Newsletter
Get The Macallan® Rare Cask at ReserveBar. Shop now!