Editor’s Note: These whiskies were provided to us as review samples by Old Pulteney. This in no way, per our editorial policies, influenced the final outcome of this review. It should also be noted that by clicking the buy link towards the bottom of this review our site receives a small referral payment which helps to support, but not influence, our editorial and other costs.

What does a fishing town with no road access need? Why, a whisky distillery, of course! That is exactly what James Henderson did in 1826, in what was Pulteneytown (now a part of the township of Wick) in the north of Scotland. This was the height of the herring boom in the area.

“Wick became known for the barrels of silver (herring) and gold (whisky) which left the port in vast numbers.”

While many distilleries had their ups and downs, the Old Pulteney distillery had some fairly extreme ups and downs. The distillery did fairly well for itself during the mid to late 1800s. However, shortly after new owner James Watson took over in 1920, Wick became a ‘dry’ town, banning the use of alcohol as well as licenses for the creation of alcohol. This ban would remain in effect in Wick for 25 years. Thankfully, after the ban was lifted, and a rise in demand for whiskey in Europe came about, new owner Robert “Bertie” Cummings got the distillery up and running again, and it hasn’t stopped since.

While the herring trade has died in Wick, the Old Pulteney distillery is still going strong. One of the aspects the distillery takes pride in is the uniqueness of a high exposure to the salty sea air. While this might not seem like an important aspect, think about any time you may have eaten fresh seafood at a coastal restaurant in comparison to seafood at an inland restaurant. The sea air does seem to add something to the flavor and taste of the food, and the same can be said for the Old Pulteney whisky. Aged in American Oak ex-bourbon casks and Spanish Oak ex-sherry casks, along with the exposure to the sea air, gives a wonderful and unique flavor to these whiskies.

In this series of reviews we explore most of the core range of this distillery. 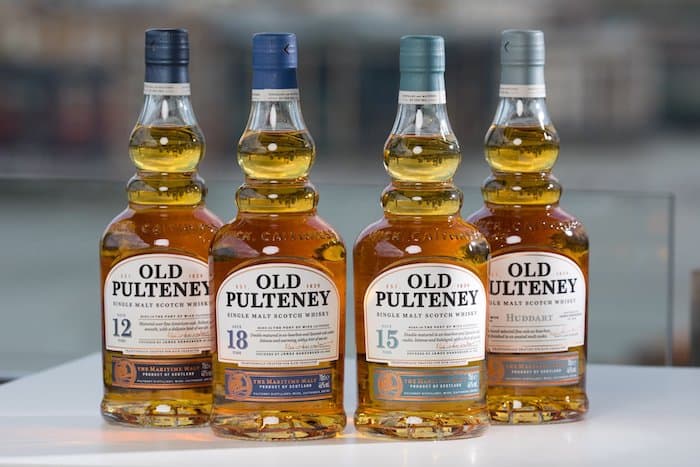 Nose: A very nice subtle smokiness, with slight hints of toffee, and honey, with a glimmer of green apple.

Palate: Very much a nice light taste of smoky honey and almost fruity touch. Slightly brininess, that you would expect from something exposed to the salty sea air.

Final Thoughts: Old Pulteney Huddart is a wonderfully smooth Scotch whisky. The flavors are light and goes down smoother than almost any other whisky I have had. This would be a perfect whisky to offer someone who has never had whiskey, or someone who has been on the fence about whiskey. The touch of briny flavor from the sea air adds a perfect touch that you won’t find in hardly any other whiskies.

Appearance: A light gold, copper color, with a very slight hint of red.

Final Thoughts: While definitely not as smooth as the Huddart, Old Pulteney’s 12 year old single malt Scotch whiskey is wonderful and can definitely stand on its own, apart from the Huddart. The sea air brininess is even more apparent in this offering.

Nose: A very sweet smelling whiskey. Definitely some fruity hints to it, with only a slight hint of smokiness.

Palate: Very strong taste of spices when it hits your tongue. But there is a lingering sweetness to it, almost a dark chocolate and toffee hint.

Final Thoughts: The Old Pulteney 15 year old whisky definitely hits you right away with the spiciness. As the distillery states, this is a good balance of the spicy and the sweet. The spices hit you hard, but then the sweetness lingers on your tongue. This is a very unique flavor whiskey.

Nose: This is a very lovely smell. Nice hint of chocolate and vanilla.

Palate: Very nice flavor of smoky chocolate, with a immediate bite of spice, with a hint of fruit flavor, almost like dried dates. A very unique flavor, with the added brininess that seems to be a trademark of this distillery.

Final Thoughts: Old Pulteney 18 year old whiskey hits you with the spice right away, just like the 15 year old. But in this case, the chocolate and a unique fruitiness lingers. And once again, you can definitely taste the brininess that the exposure to the salty sea air of Wick adds.