Editor’s Note: These whiskies were provided to us as review samples by Moon Harbour. This in no way, per our editorial policies, influenced the final outcome of this review. It should also be noted that by clicking the buy links in this article our site receives a small referral payment which helps to support, but not influence, our editorial and other costs.

A fine glass of Bordeaux could now mean something different with Moon Harbour Distillery entering the fray. The region, mainly known for its rich red wines: blends of Cabernet Savignon and Merlot, and ends-of-the-spectrum white wines: Sauternes and Sémillon, is situated directly between Cognac and Armagnac. Perhaps it was a matter of time before it became known for something a little stronger. Something a little browner. Something a little… whisky.

Two Bordelais gentlemen are at the helm, Jean-Phillipe Ballanger and Yves Medina. They met in 1986 while working near the harbor. Being more whisky connoisseurs than creators, they enlisted the help of John McDougall.

McDougall, on the other hand, has been at the top of the ladder at more than 14 distilleries: one in every producing region of Scotland, another in the Shetlands, one in California and a little gin spot in Plymouth, and been involved in at least 20 more. He started life as the son of a grain trader who supplied barley to the maltings who, in turn, supplied the distilleries. He worked his way up through malt production, distillation, bottling, blending, quality control and even marketing, making him a well-rounded expert of 52 years.

Moon Harbour is the English translation of the place where Ballanger and Medina met. Bordeaux’s waterfront is known as Port de la Lune due to the crescent shape carved by the Garonne River through the Chartrons neighborhood. Still, though, why make whisky here?

When I think of whisky lovers, my first thought is not the people of France. But I’m wrong. According to 2009 data, French drinkers purchased 142 million liters of Scotch, more than any other country in the world. Whisky beats out stereotypically French tipples like pastis.

So it makes sense from a market perspective. Turns out, Moon Harbour is also clever with regard to rehabilitation architecture. The aging cave is a repurposed WWII-era diesel bunker, built and positioned to supply the German u-boats that once occupied the massive concrete la base sous-marine that juts painfully into the harbor.

The bunker walls are over 18 feet thick (six meters), providing insulation to rival the most even-keeled cubbies of Bordeaux’s other famous liquid. The distillery itself apends this structure. The surrounding grounds are interlaced with walking paths and gardens. 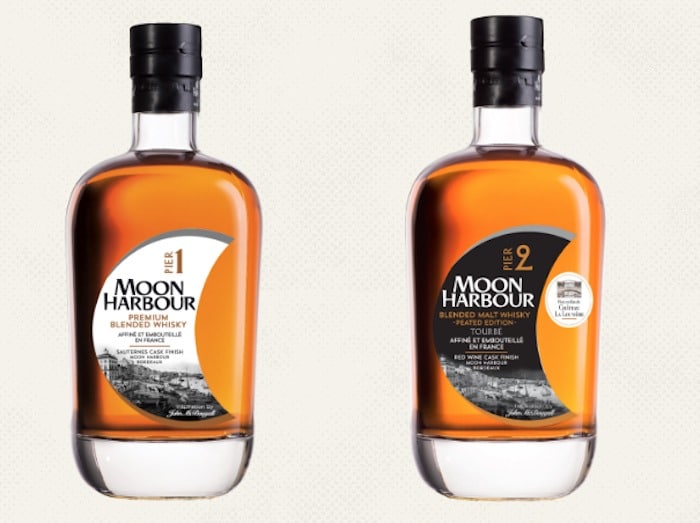 Vital Stats: This whisky clocks in at 45.8% ABV. The mash bill is undisclosed, as is the age, though the minimum aging in France cited in Moon Harbour literature is three years. Available in select global markets for around 52USD.

Appearance: This whisky is a very clear, pale honey that beads and forms medium tears.

Nose: The fragrant nose is soft with white flowers and grapefruit peel, underlain with biscuity notes.

Palate: Peach bursts on the palate, herbal bitterness on the back palate.

Vital Stats: Our second Moon Harbour whisky is bottled at 47.1% ABV. The mash bill is 100% malted barley, and, as above, we can assume a minimum age of three years. Available in select global markets for around 59USD.

Appearance: This whisky is a very clear, medium honey that forms medium tears.

Palate: The smoke evolves into smoked meat and fireplaces, breaking into cereal sweetness laced with iodine on the mid-palate, underlain with toffee. The flavor parks there, not reaching the back-palate, with a lingering woody bitterness.

13
Shares
1.3k
Views
Share on FacebookShare on TwitterGet Our Newsletter
Get The Macallan® Rare Cask at ReserveBar. Shop now!