Editor’s Note: These whiskies were provided to us as review samples by Kaikyo. This in no way, per our editorial policies, influenced the final outcome of this review. It should also be noted that by clicking the buy links in this article our site receives a small referral payment which helps to support, but not influence, our editorial and other costs.

I must say that I was surprised to receive a bottle of gin in addition to the whiskies for this one. But hey, why the heck not? I do enjoy gin, especially when the sun is out. Gins have been increasingly produced in Japan and given their careful curation of spirits, I was certainly curious as to what one may find in the bottle.

The story of the Kaikyo distillery began back in 2018, though there have been several generations in the business of Sake and other brewing endeavors. The new distillery itself shares space with their Akashi Sake production facility. The distillery building itself is named after the bridge adjacent to the property.

The Kaikyo Distillery, owned and helmed by Kimio Yonezawa, is created these spirits to encompass the warm hospitality of Japan. Even the name of the Hatozaki whiskies is meant to bring forth notions of welcoming. Hatozaki is the name of the oldest stone lighthouse in Japan, being constructed in 1657 and lies in the port of Akashi.

The Hatozaki line is still in the early stages of production and there is little more information about the brand. However, according to those behind it, here’s a little introduction to the whiskies.

“Hatozaki Finest is created through a two-stage blending process. Whiskies are aged in casks for several years and have a minimum malt whisky content of 40%. It is never colored or filtered which preserves the whisky’s personality.

Hatozaki Small Batch is a 100% malt whisky. It is an artisan blend of 5 to 6-year-old single malt whiskies produced in small batches of less than 20 casks. The blend is aged for several years in old bourbon and sherry and mizunara casks (Japanese white
oak from the Hokkaido and Tohuku forests). It is never colored or filtered which preserves the whisky’s personality.” 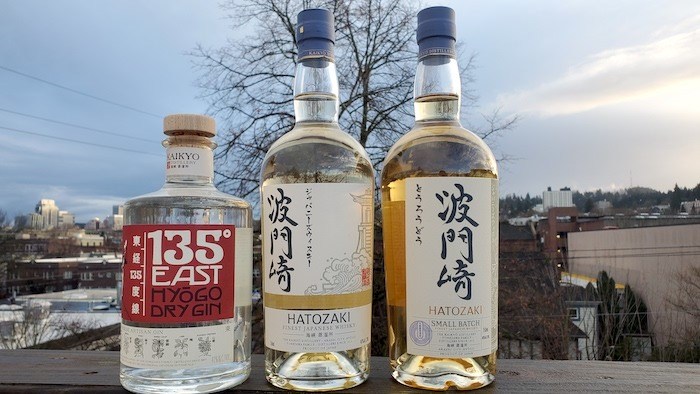 Appearance: A pale yellow. In the glass, there were several legs that emerged.

Nose: Definitely soft fruit and pepper. There were some notes of honeydew mixed with a touch of heat. Overall, the nose was pleasant and bright.

Palate: Bold for such a light whisky. It’s really bright with melon flavors mixed with apricot. Not a long finish, but in the end was able to pick up some pepper.

Final Thoughts: I think this one is a great introduction to Japanese whiskies, especially for the price point. It’s pretty straightforward from nose to palate with simple flavors.

Appearance: A light yellow, slightly pale. In the glass, there were slight legs, though minimal.

Nose: Big on lemon zest, with a bit of melon. Some oak was in there, though the fruit elements were more prominent.

Palate: The first impression was of a light and fruit forward whisky. I let this one rest for a beat and gave it another good swirl. I was able to pick up a bit more of the nuances going on. The fruit elements were still prominent, but intermixed with a touch of pepper and some mild richness from the cask finishes.

Final Thoughts: Between the two whiskies, this one has a bit more going on. There’s certainly more depth in the tasting experience. I found this to be a tad bit more floral and sweet, most likely due to the cask finishes. At the end of the day, I’d say that this one is worth the extra buck and provides a bit more of a punch at 92 proof.

Nose: Dry but floral. Some citrus and pine.

Palate: Same as the nose. Light and fruity in the front. Medium bodied as it sits on the palate for a moment, but finishes with a hint of citrus.

Final Thoughts: I thought this was a solid gin, though nothing really all that exciting either. That said, it’d make for a great martini with a lemon twist or perhaps as a Collins.

9
Shares
6.1k
Views
Share on FacebookShare on TwitterGet Our Newsletter
Cheers to the Dads! Personalize a bottle of his favorite whiskey to create a modern gift for the modern man. Use code: FATHERSDAY20 for $20 off your next order of $100 or more at ReserveBar