Whisky Reviews: BenRiach “The Original Ten” and “The Twelve”

Editor’s Note: These whiskies were provided to us as review samples by BenRiach/Brown-Forman. This in no way, per our editorial policies, influenced the final outcome of this review. It should also be noted that by clicking the buy links in this article our site receives a small referral payment which helps to support, but not influence, our editorial and other costs.

Much of BenRiach’s history has been spent silent – but they continue to come back, most recently with a roar and an outpouring of expressions.

Closely linked to Longmorn throughout its history, BenRiach (Benriach at the time) and Longmorn were both created by John Duff & Company, in 1897 and 1893 respectively. Unlike its neighbor, BenRiach only made it to 1900 before spirit production halted. The distillery continued its classic floor maltings in order to provide malt for Longmorn, which kept BenRiach in “mothball” state as opposed to fully silent, which was an integral aspect of keeping the distillery from falling into ruin, allowing for the thriving business it is today.

And thriving is an understatement. With the Brown-Foreman acquisition of three distilleries in 2017 (including The Glendronach and Glenglassaugh) came the appointment of long-time Master Blender Rachel Barrie. Barrie is both a Keeper of the Quaich and a member of the Whisky Hall of Fame. In other words, a whisky rockstar and well-suited to this project.

Barrie has overseen production at all the new Brown-Foreman distilleries – including the BenRiach relaunch this September. BenRiach has some unique elements to their whisky-making process. They’ve tweaked distillation to add a wash, a seemingly minor addition that contributes to the whisky’s sweetness.

A more major stand-out is their smoky line. Speyside in general has opted for unpeated barley for the vast majority of their products. While several Highland and Speyside regions release peated expressions from time to time, BenRiach’s commitment to an annual smoky line is an exception to the norm.

BenRiach’s long, if fairly quiet history, has left them with a goldmine of casks to choose from. Even with that, they continuously import more as part of their “eclectic cask” maturation. All of their whiskies spend time in first-fill Bourbon barrels before moving on to their respective eclectic barrels, including lesser seen finishes such as Marsala and Jamaican Rum.

BenRiach is silent no longer, and if its popularity is any indicator, it won’t be again. This relaunch is a chance to continue its achievements with new ownership and vision, a natural function of the whisky world. As for what I’m reviewing here, both of the expressions in this round up are on the unpeated barley side. 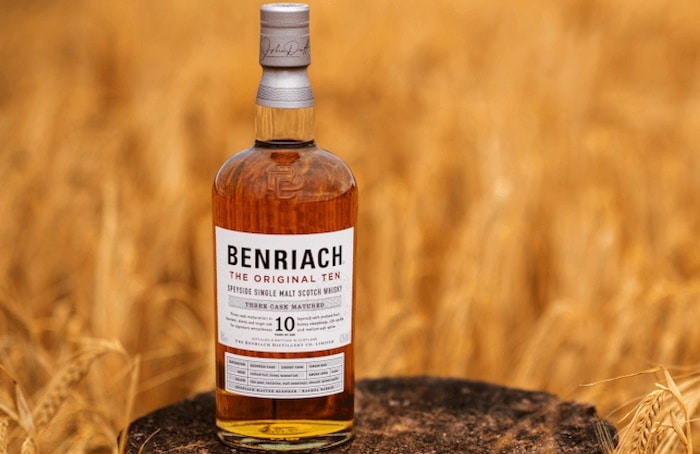 Appearance: Champagne with a touch of peachiness

Nose: Juicy peaches right away mellow into cereal grains, but also the fresh loveliness of baked goods. The finish has the brightness of strawberry and the tartness of raspberry.

Palate: The body is light all the way through. Just a touch of that fruit up front, bright, juicy peach and red grapefruit. This warms and sweetens to the back palate with note of red wine and cocoa.

Appearance: About a shade darker than the Original Ten, leaning peachier

Palate: That dried fruit starts you off here, becoming richer and warmer into very dark chocolate. A burst of juicy fruit comes out like a sneaker wave, like peach lemonade. The back palate is pleasantly dry, and has a wisp of vegetal smoke.

Final Thoughts: These great scotch distilleries are capable of a great range of flavors, even under the 15 year age mark, and these still stand out. The Original Ten has more flavor upfront and clearly, while The Twelve has similar flavors but deeper and richer. BenRiach is known for a touch of smoke across even their unpeated expressions. I didn’t get any of that from the Original 10, but it came through in The Twelve.

348
Shares
4.3k
Views
Share on FacebookShare on TwitterGet Our Newsletter
Read More Whiskey News
The GlenDronach Cask Bottling Batch Is Available For The First Time In The U.S.
Get Jefferson's Ocean at ReserveBar. Shop now!