Editor’s Note: This whiskey was provided to us as a review sample by Wilderness Trail Distillery. This in no way, per our editorial policies, influenced the final outcome of this review. It should also be noted that by clicking the buy link towards the bottom of this review our site receives a small referral payment which helps to support, but not influence, our editorial and other costs.

Bourbon and Kentucky go hand in hand. No drink embodies the traditions and flavor of the South quite like it. Bold, sweet, spicy, and welcoming to the palate.

Even though bourbon can be distilled anywhere in the U.S., if it does not follow the basic regulations established in the 1800s, it cannot be called bourbon. The most “American” of drinks, bourbon has been defined by names like Jim Beam, Buffalo Trace, and Makers Mark, all of which have their mass production bottles along with their boutique and high-end labels. Setting yourself out from the pack is no small feat, but with the talented palates of Shane Baker and Pat Heist helming Wilderness Trail Distillery, there are sure to be some waves made.

Founded in 2012, Wilderness Trail Distillery produces a focused line of spirits. I find this restrained style of production refreshing, since many companies I come across, especially younger ones, aim for quantity of offerings which can wear out the palate. Currently Wilderness Trail offers four distinct styles of whiskey and one vodka, but they have also had a barrel aged rum as part of their lineup as well. The brand actually makes two different bottled-in-bond straight bourbons; one featuring wheat as the small grain, and one featuring rye. This is the rye version. Both are aged in upscale barrels made from staves that have been air dried for 18 months and are toasted before being charred. 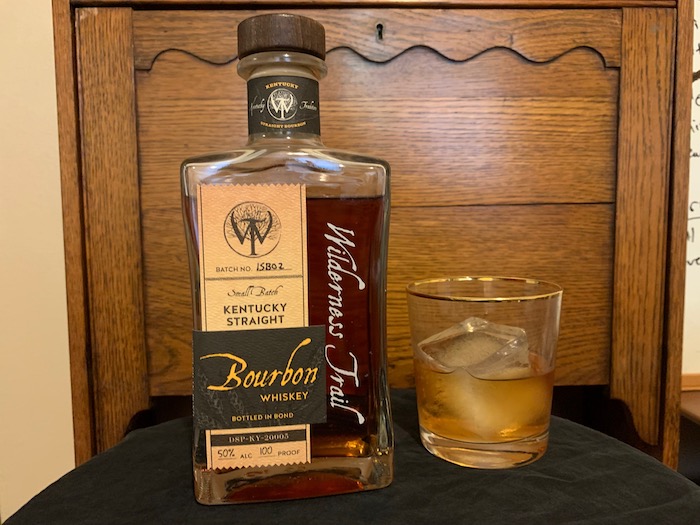 Appearance: Rich amber that falls down the side of the glass in thick legs.

Nose: Butterscotch and ripe peach with a hint of red apple hit the nose with a sweet and fruity front. This is rounded out with a welcome note of oak and brown sugar. In the background there is a slight hint of wood varnish for a gentle sour twang.

Palate: Sharp heat wakes up the palate. Malt and brown sugar are front and center with a flavor reminiscent of rye bread. Cinnamon and black pepper provide a robust spicy character that is smoothed out by oak and a bit of citrus from orange peel. Ice brings out the baking spices with clove and nutmeg while calming the sharpness a bit. The back end of the tongue picks up a pleasant vanilla note that opens up in the aftertaste.

This is a bold, aggressive bourbon. I found most of the pleasant flavor notes I look for when I poured this whiskey over ice, or took very small sips that I allowed to hang out on my tongue for a bit as the fumes mingled in my mouth. If you enjoy big, robust flavors with a bit of a medicinal note than this one is a solid entry into the bourbon landscape. If you want a slow sipper over ice, this will also fit the bill for you.