Editor’s Note: This whisky was provided to us as a review sample by The Macallan. This in no way, per our editorial policies, influenced the final outcome of this review. It should also be noted that by clicking the buy link towards the bottom of this review our site receives a small referral payment which helps to support, but not influence, our editorial and other costs.

The Macallan distillery in Scotland is known for its extensive use of sherry cask aging, but not for creating Frankenstein-like sherry monsters. Basically, we are talking about a “sweet spot” whisky that has wide appeal. Another nice thing about The Macallan Double Cask 15 Years Old is its deep, rich color that occurs naturally in the aging process.

As of 2020, Macallan’s Double Cask series now comes in 15 years of age, as well as 18 years. The 12 year old flagship offering is also still available. That was first sold in 2016.

One thing that stands out about all three of The Macallan’s Double Cask offerings is the way new American oak barrels are shipped to Spain for the making of sherry. European oak is also used to create sherry in Spain. Afterwards, each type of barrel, seasoned with the sherry that was aged in them, is sent to The Macallan in the Speyside region of Scotland. Hence, this whisky’s name “double cask.”

According to a spokesperson, “[t]he result is a perfect partnership, with the sherry seasoned American oak imparting delicate flavors of vanilla, while the European oak delivers the subtle and unmistakable spice and classic style of The Macallan.”

This hands-on approach to the sourcing and sweetening of cask wood is fairly unique. Not many distilleries are able to maintain such a close working relationship with sherry producers that pass along seasoned casks to Scotland. This rigorous form of quality control has been known to result in reliably consistent whisky offerings. However, it’s worth mentioning that there is a slight flaw in the latest batch of 15 year old Double Cask (in the opinion of this review) that can be attributed to sherry cask management. 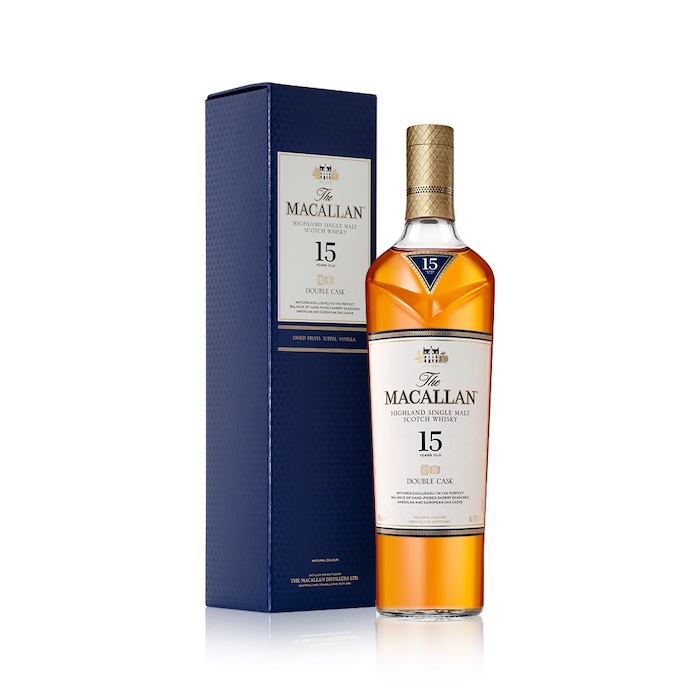 Palate: More fruits, but this time dried with a hint of ginger. Irish breakfast tea, fragrant oak, orange zest. This followed by nutmeg and sour sop (a flavor that hovers between dried pineapple and overripe banana). Thankfully, no sulfur haunts the mouth. The finish is slightly oily (for only 43%), and length is on the long end of short, but falling short of medium. A kind of pepperiness swells at the death (European oak esters).

The finish is this whisky's drawback. Two or three more points in the ABV scale would have worked wonders to remedy such a weak finish. It's worth mentioning that The Macallan 18 year old Double Cask is noticeably better, even at an anemic 43% ABV.

Can the difference be chalked up to three more years in wood, or is there something else, as well? Hard to say. On the other hand, The Macallan 15 Years Old Double Cask is better than its Triple Cask sibling, even from years gone by. Bravo.

Aside from a weak finish in the more recent 15-year-old Double Cask release, there is that hint of gun powder on the nose to consider. Sulfur is a tricky thing, which, unfortunately, can come with the territory if sherry wood is involved in the aging process.

In this case, the note is far from overpowering. But even the (metaphorical) hint of a smoking gun has been known to cause some hands to cover their glasses politely, should a second round be offered. By way of a disclaimer, it should be mentioned that aversion to light sulfur in a whisky's scent is a matter of opinion. This view is by no means universal, or even definitive.