Editor’s Note: This whiskey was provided to us as a review sample by The Glenlivet Distillery. This in no way, per our editorial policies, influenced the final outcome of this review. It should also be noted that by clicking the buy link towards the bottom of this review our site receives a small referral payment which helps to support, but not influence, our editorial and other costs.

One of the most well-known single malt scotches in the world, the Glenlivet can be found in a great many restaurants and bars. Officially established in 1824, this distillery brings in excess of 25 different products to market.

190 years later in 2014, the Glenlivet released its now-famous 1824 Founder’s Reserve Single Malt Scotch. The offering was meant to compliment its standard 12 year old version, and was branded to honor founder George Smith. According to the distillery, Founder’s Reserve is “created using the time-honoured distillation methods that he introduced so long ago. Made with water from the same crystal-clear mountain streams, in the same cold, pure air, The Glenlivet Founder’s Reserve is as smooth and fruity as the whisky that first ran from the original copper pot stills.”

This whisky is aged in American first-fill oak casks that have never before been used for any purpose. According to the Glenlivet, Founder’s Reserve blends in-house whiskies from a variety of ages. Yet another example of the trend towards No Age Statement releases, Founder’s Reserve is said to be “considered a 12 year old Scotch by most.”

Do I agree with such an allegedly “widely held” opinion? Not really. If there is no age statement, I don’t “consider” Founder’s Reserve to be 12 years old. Instead, I “consider” it to be whatever ages happen to have been thrown together for the batch. One thing I can be sure of: the casks of whisky are all from the Glenlivet. It’s not a blend of whiskies from other distilleries. 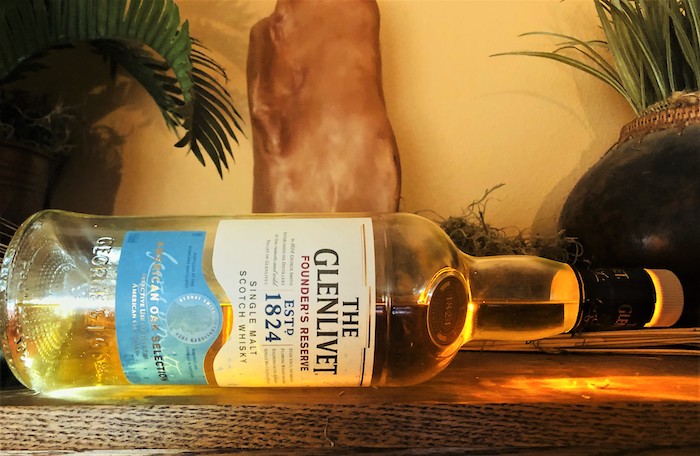 Appearance: The actual color of this whisky cannot be determined since it is artificially colored. The artificial color is “golden.”

Taste: Hints of toffee mingle with raw oak tannins and barley, as can be expected. Now is where I’m supposed to say the whisky offers hints of milk chocolate and more raisins, as well. Does it really? I suppose. If you really must find analogies to use. A more jaded critic might aver it tastes as though he were sucking on a peach pit which had been soaked in barley water.

On the bright side, let it be known I’ve used the Glenlivet Founder’s Reserve in creative vattings that were rather fun to concoct. Here’s my favorite recipe: Three parts Founder’s Reserve, one part Ardbeg Ten, a dash of Oloroso sherry, and a smidge (very small amount) of dark roast coffee. I call this a “Cockteau Twin,” and it’s delicious (with or without ice). Yes, lower priced Glenlivets can be used to advantage in cocktails FOR SURE, especially when combined with lesser amounts of peated Scotch.

As for higher priced Glenlivets, they can be really good. For example, last year I bought a 12 year old 2007 Signatory Vintage that was sold exclusively by The Whisky Exchange. It was aged in a first-fill sherry hogshead (#900216) with a total yield of only 329 bottles. Suffice it to say, the color was 100 percent natural and it was quite dark, indeed.

The price of that lovely single cask Glenlivet was also more than reasonable for what it was (83 pounds, plus shipping). Truth be told, the whisky was beyond merely what one might called “complex.” It offered intense fruits on the palate and nose, along with jammy, syrupy notes, chocolate galore, tobacco, chili powder, orange peel, gingerbread and walnuts. Man, I wish I’d bought two of those bottles. In fact, if you come across one at auction, I recommend you pull the trigger (especially if you are able to finagle a bottle for 100 pounds or thereabouts).

My advice if you feel like a Scotch, and the Glenlivet Founder's Reserve is all you can find in a restaurant or a bar, order the whisky on ice. I'm not usually an "ice man," but in this case it's just what the doctor ordered.

Considering this product is more than fairly priced, you get what you pay for. It's not horrible, by any stretch. If the world ended up moving closer towards a "reset" in which no more whisky could be had, and you were to stumble across a bottle of Founder's Reserve on the dusty back shelf of a store in a deserted city, then you would surely jump for joy.

So if and when you find yourself gulping down a glass of Founder's Reserve, imagine that Armageddon has already begun. Because it might well have.