Editor’s Note: This whisky was provided to us as a review sample by The Glenlivet. This in no way, per our editorial policies, influenced the final outcome of this review. It should also be noted that by clicking the buy link towards the bottom of this review our site receives a small referral payment which helps to support, but not influence, our editorial and other costs.

The Glenlivet holds a rare place among Scottish distillers. This famous distillery, which opened in 1824, is among the earliest to take advantage of “legitimate” whisky distillation, according to the royal approval of King George IV.

Ironically, this well used factoid in reviews kind of misses the original “spirit” of whisky making in Scotland, as it were, since the tradition was more about being rebellious up in the mountains (bootlegging) to avoid unfair taxation without representation.

But no matter. The Glenlivet is one of the biggest producers of single malt whisky, shipping millions of cases worldwide every year, from Elgin, Moray, in Scotland; to Elgin, Illinois, in the USA; to Elgin, Queensland, in Australia.

Launched in 2020, the Glenlivet’s Caribbean Reserve is extremely affordable (hovering between thirty to forty dollars in most parts of the United States). The distillery doesn’t offer much background about this new offering, so there isn’t much to explain here. It’s a no-age statement whisky that was partially finished in Caribbean rum casks. We don’t know from which distilleries in the Caribbean, and we don’t know the percentage breakdown of rum to bourbon (or virgin?) casks.

Those of us who spend time thinking about nerdy things at the Whiskey Wash found ourselves wondering why the Glenlivet doesn’t use 12-year-old whisky instead, and add an age statement. It seems that some wiggle room is desired by those who plan and market the products, which means some (or all) of this release could be younger.

A few reviewers online compared this whisky to Balvenie’s 14-year-old Caribbean Cask, another Speyside, mass-produced offering. In our opinion, Balvenie’s 14 year old, rumwood-aged whisky is far superior. It’s also quite a bit more expensive. So we don’t really see the point in comparing the two, but now I’ve gone and done it, as well. 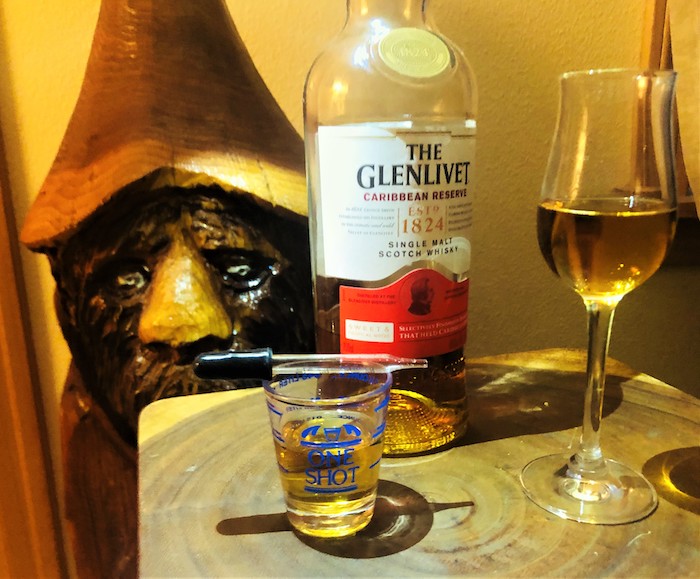 Appearance: There is no appreciable difference in color between Caribbean Reserve or Founder’s Reserve or The Glenlivet 12. The coloring in all three is due to E150a. This additive colorant gives a “golden” hue to each of these pours, which has been fined tuned into a pleasing color for those who don’t really know the difference between real and fake when it comes to Scotch.

Palate: Fairly viscous for a measly 40% ABV. There are generic notes of ruminess, along with caramel, coconut milk, and sugarcane. Wood esters come through fairly distinctly, at least considering how most of this batch seems younger than 12 years old. This makes me wonder if part of the casks used were virgin oak.

A Chinese white pepper note tricks the tongue into a prolonged “death.” How very fitting. As a result, the finish is longer than Glenlivet’s 12 year old. I’m thinking some younger whisky is responsible. If so, it’s been added strategically to the batch before being transported around the world in mass quantities.

In order to redeem himself, he went on to say that Sam Elliott would occasionally saunter in to buy a few bottles. That really tickled me at the time because I'm a big Sam Elliott fan. I pictured "The Stranger" at home on his deck, with an expansive view out over Portland, Oregon, maneuvering his whisky glass between both sides of his handlebar mustache to savor the sweet, malty goodness.

As for the Glenlivet's Caribbean Reserve, it's not bad for the price. I like it a hair better than Glenlivet's 12 year old offering. But that could change in time due to the fact that batches of the Caribbean could get even younger in the future (without an age statement). The Glenlivet Founder's Reserve is a tad more malty in a vague way, whereas Caribbean Reserve is snappier and better defined, along with a slight rum note.

Either way you pour 'em, they both are bargain Scotches. And either way, I will take my pour with ice, even though I'm not known for drinking whisky on the rocks. By the way, Caribbean Reserve would work fine in a wide assortment of cocktails, especially those which specify a Speyside whisky, and which happen to include other domineering sorts of ingredients. Yes, we are talking about pretty much anything lively to take the focus off a watered-down, entry-level Scotch...and that includes serving drinks in fun cocktail glasses, as well.