Editor’s Note: This whisky was provided to us as a review sample by Edrington Group. This in no way, per our editorial policies, influenced the final outcome of this review.

The Famous Grouse. A blended Scotch whisky, often associated as something one might find in a bartender’s well and also with some of the old school crowd who do an order of scotch on the rocks, or perhaps with soda. There’s no judgement here. Your money, your whisky, so please feel free to do with it as you like.

As with many houses in the whisky business, The Famous Grouse is founded upon family roots. At the beginning of this Scotch was Matthew Gloag in 1896 and his signature is still printed on each bottle to this day. Beforehand, his father, also named Matthew, had a hand in the wine and spirit business in 1835. His uncle William had begun blending whiskys in 1860.

You’ll find the Grouse operation, which is owned by the Edrington Group, is housed at the Glenturret distillery in Crief, and is said to be the oldest operating distillery in Scotland. A quick, fun fact – it was originally known simply as “The Grouse” until 1905, when it was also given the “Famous” part of the name found today. In addition, Grouse was awarded a British Royal Warrant in 1984. That pretty much means that it’s officially backed by royalty, which is pretty cool.

As with many blended scotches, the goals are consistency and quality. Generally, at a value price. I would love to drink a pour from a $50 bottle of whisky from most producers any day of the week, but alas, it is not quite there yet. We find value where we can, and enjoy the whisky, or whiskey, wherever our whims take us.

The producers of The Famous Grouse pride themselves upon this consistency. Over the years, they have formed lasting relationships with chosen grain producers, water sources, and cooperage. When it comes to wood, Grouse is finished with former sherry and bourbon casks, giving it that definitive sweet and smooth flavor profile. 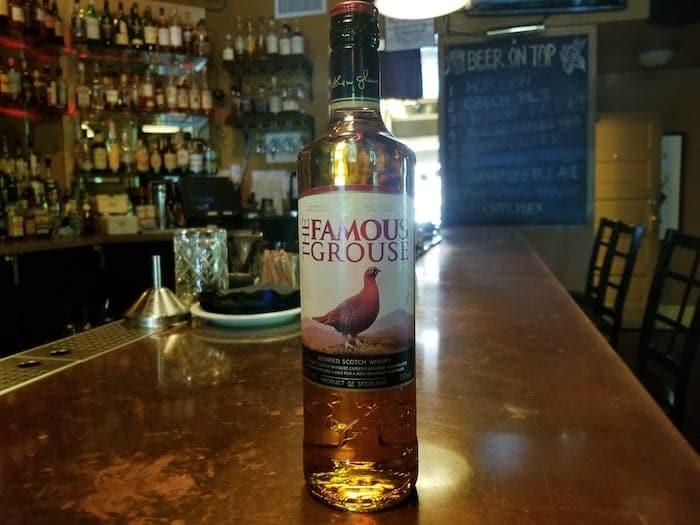 Appearance: A pale orange, reminiscent of an orange lifesaver. Matthew Gloag’s signature is printed on every label. Pictured on each expression of the whisky is, in fact, a picture of the bird of the same name.

Nose: Slightly boozy, with aromas of melon, and a whisper of smoke.

Palate: A whole lot of honey on the side palate to start, and upon exhale more herbaceous flavors emerge with a bit of peat lingering in the background. The long finish keeps to the core flavors of the whisky. In many ways, comforting.

Casual sipper and useful in cocktails, for sure. I give it a solid B for overall versatility. There are are other Grouse expressions out there though, and I am curious and will be happy to explore these variations as well.