Editor’s Note: This whisky was provided to us as a review sample by The Balvenie. This in no way, per our editorial policies, influenced the final outcome of this review. It should also be noted that by clicking the buy link towards the bottom of this review our site receives a small referral payment which helps to support, but not influence, our editorial and other costs.

The Balvenie is a particularly interesting Scottish distiller, and offers a range of whiskies with distinct Speyside character. It grows its own barley on a good amount of planted acres, maintains an old-school malting floor from a pre-industrialization age, keeps a coppersmith on staff to handle its stills and employs a cooper to make and maintain its own barrels and casks. Planting to bottling, if it happens to Balvenie whiskies it happens on-site.

Located in Dufftown, in northern Scotland, The Balvenie is situated near and owned by the same parent company as Glenfiddich. It manages to maintains a personality all its own, however.

David C. Stewart, the malt master, has made a nearly 60-year career taking advantage of the distillery’s on-site cooperage to age and finish distinctively sweet and honeyed Balvenie Scotches in an astonishing variety of barrels and casks. In 2016, Queen Elizabeth II named Stewart a Member of the Order of the British Empire (roughly equivalent to the U.S. Presidential Medal of Freedom) for his contributions to Scotch whisky.

In the case of the Caribbean Cask finish, Stewart made his own blend of West Indian rum, aged it for a time in casks and then eventually replaced it with Scotch. The whisky had spent at least 14 years in traditional oak barrels before finishing in the rum casks.

No word on what happened to the rum. 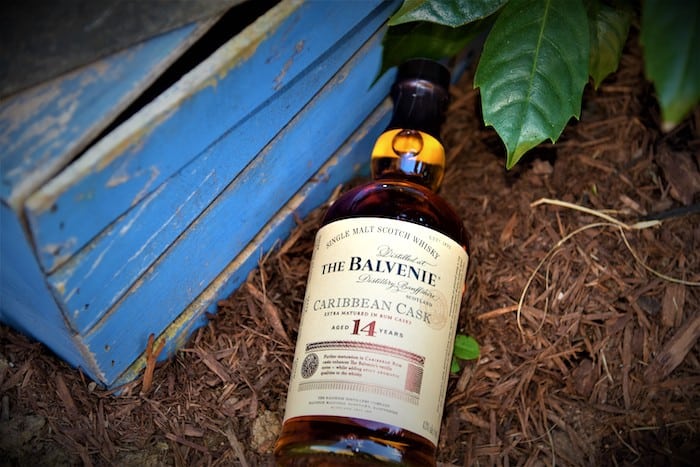 Palate: You can taste the barley, but almost as an after-thought. This is not Scotch that hits you in the face. It’s relatively sweet, reminiscent of brown sugar and English toffee. The finish is long and warm.

Without the rum-cask finish, this would still be good Scotch. In keeping with the Speyside style, this single malt is grassy and rich without being overly smoky or peaty. The rum-cask finish, then, brings a touch of sweetness and vanilla to the proceedings. Even my wife, not much of a whisky drinker, likes this whisky. It’s a very good Scotch for under $100.