Editor’s Note: This whiskey was provided to us as a review sample by Stauning Whisky. This in no way, per our editorial policies, influenced the final outcome of this review. It should also be noted that by clicking the buy link towards the bottom of this review our site receives a small referral payment which helps to support, but not influence, our editorial and other costs.

The name of this whiskey heralds from the political. Thorvald Stauning (not the namesake of the whiskey; rather that’s the village it’s located in) was the first social-democratic president of Denmark, and had the campaign slogan “Stauning or Chaos” (kaos, in Danish).

It makes sense that Danish history is represented in a Stauning Whisky product, considering that the brand is strongly based in being a Danish product. All of the raw material that goes into the creation of the whiskies is not just from the country, but the immediate surrounding area.

Terroir, more and more being a significant factor in whiskey production, is considered twice-over here: Not only do the grains, water, peat (and heather) come from the area, but every process was reconsidered for climate and tradition. Stauning floor malts their barley in their own distillery, originally an old butchery, using butcher’s equipment. As of 2018, distilling takes place in Stauning’s new, state-of-the-art distillery that’s also an example of Danish architecture.

The whiskies are all created by double-distillation in copper pot stills from Spain, one of the few non-local elements. Calling upon tradition again, Stauning chooses an open fire heat source as opposed to gas heat or steam – one of the only whisky distilleries in the world to do so. Open fire hits a higher temperature than modern methods, creating different flavors of course, and adding “character” according to the distillery.

The “chaos” of this bottle is its mash-up of Stauning products – “everything they do in one bottle.” They’ve blended three of their single malts into a “triple malt” that brings malted rye and barley, as well as a smoked malted barley. For an American touch, the aging of the blend was done in both charred virgin American oak, as well as re-filled Maker’s Mark barrels.

Kaos might be what the distillery puts out into the world, but it’s far from the story within the walls. The small brand quickly got big attention from the whisky writer Jim Murray, who encouraged the founders to continue and expand, and René Redzepi, the chef at Noma, who made Stauning the exclusive whisky at the restaurant. The brand has also raked in the awards, giving Nordic whisky a more established place in the world of fine whiskies. 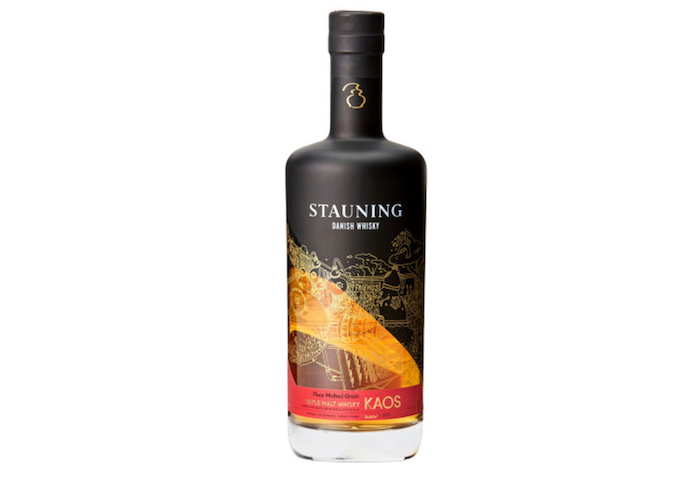 Nose: A light smoke comes out first, brightening and sweetening into a high octane pastry sweetness

Palate: Slightly thick texture, an interesting meet-up of flowery smoke and strong cereal grains combat for first taste. This doesn’t exactly go away, but it grows in complexity. Rummy sweetness makes a brief, perfume-y appearance. A certain nuttiness comes through afterwards to hold out, like roasted peanuts with salt but no sugar. A tangerine spiciness hovers around the edges. The finish is quick and abrupt.

The flavors of this whisky blast through with a lot of variety, but don’t spend a long time with you. Some classic rye tastes are present, and some very unique ones shine through as well. It is an entirely pleasant experience that makes you want to keep sipping.