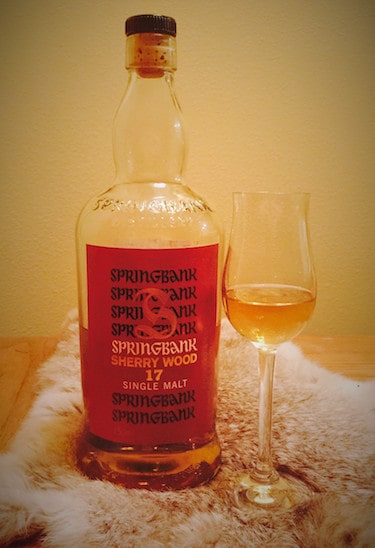 Springbank Sherry Wood 17 year old is a release from January of 2015 that was aged in sherry butts, refill sherry butts, and hogsheads, so it has an interesting balance that is somewhat atypical for a Springbank.

Yes, the signature character is present in the whisky, due to being floor malted by hand in Campbeltown, as well as being aged in dunnage warehouses, but there’s an interesting twist on the theme.

When compared with quite a few Glendronach Single Cask releases in my cabinet, the Springbank is laid back and pleasantly industrial. On the nose, a “dried grassiness” wafts up, which almost harkens back to a classic Lowland whisky from decades ago.

Contrary to what one might expect, judging by the name, this Springer is not a “sherry bomb.” In fact, sherry is not especially prominent on the nose, whereas on the palate the sherry influence is quite well-balanced, offering a complex trade-off with the peppery influence of oak hogsheads – which are half the size of sherry butts, and thus far more interactive.

Nose: Anise; black licorice; dried grass; orange peel; forest loam in a coniferous forest, along with some pine needles; whisper of peat smoke; fig bars; a distinctly dry sherry that is quite subtle; and lastly, the eau de toilette of erase markers (not in a bad way).

Palate: Ah, here is the creaminess I’ve been hearing about! Yes, it comes through nicely as a swirling cream sherry note. There is a peppery influence, as well, which yields to oak tannins that knock (somewhat bitterly) upon one’s doors of perception. The bitterness is slight, however, and provides balance to the sherry. In fact, I might even go so far as to describe this wood presence as a “brambly.”

The woodiness really complements a touch of peat, which emerges after initial impressions fade. In addition, the broth harbors a little oceanic salt. I really enjoy that coastal presence; it definitely offers a moderating influence that helps to downplay sharper notes. Balance is the key here, since this whisky also has a respectable percentage of fresh sherry butts, which hibernated in a dunnage warehouse for seventeen long years.

As I’ve already mentioned, refill sherry butts help Springbank’s distillery character to enter the mix: “Nudge, nudge, tastebuds . . . cogito, ergo sum.”  Yes, incorporating refill butts into this offering was a cost-effective decision, but it also added a clever twist on what might otherwise have been a fruit-forward, less complex whisky.

As on the nose, a delicate wine presence evokes dried fruits, such as prunes, dark raisins, and dehydrated apricots. There’s also a very slight fresh raspberry note, which might elude a few Springbank fans.

In the mouth, one’s tissues are not desiccated to any degree; rather, the spirit remains oily in a nurturing sort of way, especially considering the fact it’s 52.3% alcohol by volume. This said, flavors themselves do dry out somewhat, probably due in part to the fairly strong wood presence. It’s a complicated balancing act that doesn’t need water to drink comfortably.

A bit of irrigation brings out honeycomb, flax, and a soggy milk-laden porridge note, along with more of that quintessential Springbank distillery character. I prefer to drink my dram with a few drops of water. This said, lowering the ABV does quash some rather amusing histrionics generated by wood, spirit, and wine.

The finish is medium in length. I was expecting a longer finish, but one’s mouth is left satisfied. A lovely vanilla bean note comes out like the moon from behind a cloud: wait for it…there’s no rush…yummy. On the death, sweet and spicy notes continue to duel, without resolution. Is that a bad thing? Nay. Call it unrequited lust.

On a recent Saturday night I was over at my friend James’s house for a whisky tasting. Now it goes without saying that James loves two things in relation to events: themes, and ratings with number scores (whisky, steak, wine, you name it). I like that about him. The theme of that Saturday’s get-together was “All Things J&A Mitchell.”

Quite a few whisky snobs were in attendance, and they brought some real treasures with them. Needless to say, we rated more than a few outstanding Springbanks, Longrows, and Hazelburns. Because of this fact, I can’t help but judge the Sherry Wood 17 Year Old in relation to all of the amazing bottles that I tasted (and rated) a few days ago. So how does Springbank Sherry Wood stack up against the truly great Springers of last weekend?

Before I answer my own question, I should say that I do remember quite a few past reviews that absolutely gushed about the Springbank Sherry Wood 17-year-old. No, it’s not nearly as bright and fruit-forward as many critics averred. There isn’t much of a “lush” presence in the bottle. Instead, what we have here, is a well restrained, well-mannered Springer, which manages to be fairly complex, but falls short of “big” anything.

I really enjoy the stuff–don’t get me wrong–especially when compared with Springbank 10, 15, and 18 OB’s. Still, I can’t help but feel the nose and palate are somewhat angular, kind of like that awkward elbow next to you in a movie theater.

If given the choice, I would pick the Springbank 12 Year Old Burgundy over the Sherry Wood 17 Year Old, on any day of the week.  So what’s my final verdict? Well, for a limited release Springer of fairly advanced years, this one is certainly a welcome change of pace. Considering the fact that an official bottling of Springbank 18 Year Old, which is watered-down by comparison, sells for around the same price in the United States, grabbing a Sherry Wood is pretty much a no-brainer.

Of course, there’s caveat to this verdict: If you haven’t already gotten into a bottle of the 18 at some point in time, then you must at least consider yourself OB Springer 18-curious.