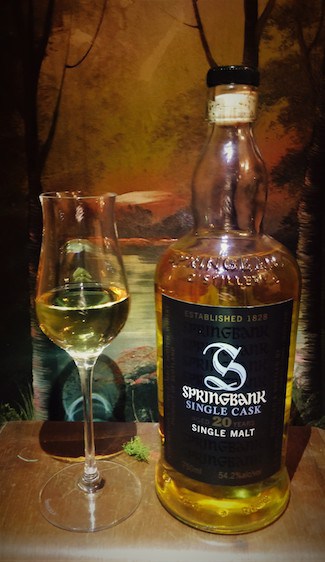 This said, the glass of sparkling golden Springbank before me certainly tastes as though it was aged in a naturally climate controlled atmosphere enabled by thick stone walls and sod floors (not entirely unlike a cave). Yes, it’s true: dunnage warehouses are enablers when it comes to imparting “old school” characteristics. Case in point: Springbank’s 16-Year-Old Local Barley, which I reviewed back in July of 2016.

My glass has already been airing out for about fifteen minutes. And so, without further adieu, I will go ahead and offer my tasting notes–both with and without water, since this whisky was bottled at a whopping cask strength of 54.2%. The angels certainly received their share out of a 20 year-old cask, which ended up producing a mere 198 bottles.

Now, I can’t be absolutely positive which sort of cask was used, but I’m guessing it must have been a hogshead. Why? Because a standard run from a single hogshead normally yields about 272 bottles.

Appearance: Color is pale gold; legs are immense with almost a preclusion of beading. As I roll the glass round, a kind of liquid sheath remains, coating the sides. Within this sheath, there are very tiny beads, which descend quickly back into whisky below. Interesting. I’ve rarely encountered a consistency such as this.

Nose: The first whiff brings corn husks, Silly Putty (in a good way), along with austere waves of tropical fruits like pineapple and Manila mango. Wow, so fresh and yet so complex. You feel as though you’re holding “Zen in a Glass,” which elegantly unites opposite ends of the sensory spectrum in a kind of olfactory mobius strip.

Follow-up sniffs reveal wet hemp rope, some lamp oil, bergamot citrus, and the faintest hint of paraffin. It’s okay to wipe the tear from your eye. Nobody is looking. For a second there, you thought you’d died, and your spirit had gone to “industrial heaven.”

Palate: The initial impression is austere. Surprise, surprise. And then comes wave after wave of development. Okay, let’s back up. Second sip. Now you’re tasting that classic Springer distillery character. In spades. The high ABV is misleading. You feel as though your tongue has been liberated, when it fact is is being very subtly numbed-down, due to so much lovely alcohol.

You keep expecting more of an aggressive peppery-oak presence, but the rum wood is very well integrated, indeed, playing second fiddle to the spirit. But black pepper is there all the same, laying low under the table. When asked to sit up and beg, the pepper barks. Just enough to keep from seeming overly-domesticated.

As your tongue recuperates with a bit of saliva, now you can detect dried summer grass in a field, paraffin, a brief puff of cigarette smoke that lingers as though you’ve taken a short drag on a Nat Sherman MCD (yes, that’s partially the high ABV talking). Then comes buttery pie crust, wet wool, and a kind of ferrous metallic note on the back end.

The addition of water (not too much) brings out tropical fruits like mango and persimmon. A second wave of flavor evokes custardy creme brulee, along with paraffin, damp clay tilth, candle wax, and more bergamot. Perhaps it’s the rum that evokes a sense of crusty glazed sugar that has been licked by the flame of a blow torch.

Over time, as water becomes integrated, the palate becomes buttery and viscous, producing a nicer mouth feel. Many folks are unaware that water is actually more dense than alcohol, so the fact that a few drops helps to create an “oilier” sensation on the tongue is not really all that surprising.

What else can be detected? Wet hay, with some barnyardy, muddied overtones, like an old bottle of 22-Year-Old Clynelish I drained a year ago. This dram is really enjoyable. Pastoral, even. Farmy goodness perks up noticeably in the glass, as this spirit shifts more into the organic “real world,” thanks to a sprinkle of water that was added the old fashioned way, with a teaspoon, instead of my usual “whisky nerd” dropper (which seems to be lost in my house).

The fun continues. Now, I’m reminiscing about some of the better Lowland scotches that I’ve tasted over the years. Yes, this dram is certainly evocative, to say the least. It’s safe to say a glass of the 20-Year-Old Fresh Rum Cask should be nosed even after it runs dry. The malt character is now more in evidence, along with some really splendid rum wood overtones.

In rare cases, the dried remains of whisky in a glass can actually smell better than the whisky itself. Ardbeg’s Perpetuum is a prime example of this phenomenon. The left-over effluvium reminds me of 1970’s Ardbeg. That’s no surprise, since I’ve been told that some of the casks, which were utilized to make Perpetuum, formerly had aged 1970’s Ardbeg in them.

As for the dram under consideration…if you find a bottle of Springbank 20 Year Old Fresh Rum Cask, buy it! Worth the price, to be sure. Yes, it’s rare, and you might only encounter the bottle at auction, but if you do, then I would say it is certainly worth a bid or two…or ten. And if you cannot find this lovely Springer, then do yourself a fave, and purchase the Local Barley 16-Year-Old before it, too, becomes “unobtainium.”