In writing this review of the Extravaganza, I would be remiss if I didn’t at least tip my hat to John Glaser’s efforts in the original Spice Tree. It came out ten years ago, when he attempted to use exotic wood staves inserted in his casks, in order to impart a deeper, richer flavor (and scent) to the final product.

Yes, that’s right: the Scotch Whisky Association got its undies up in a bunch over the use of staves (which has a long and distinguished history in the wine industry). And so, Glaser got a slap on the wrist, and promised to stop using wooden stakes to slay the proverbial “vampire” of regulation, so to speak. Wink, wink, nudge, nudge . . . a nod’s as good as a wink to a blind bat.

This time around, Glaser used toasted new French oak barrels, instead of French oak barrel staves, to age his delightful broth. True to form, he also released a rather thorough, but veiled (under penalty of yet another disciplinary action by the SWA if he revealed too much) accounting of the ingredients in his latest Spice Tree creation.

Here is the Infographic in all of its splendor: 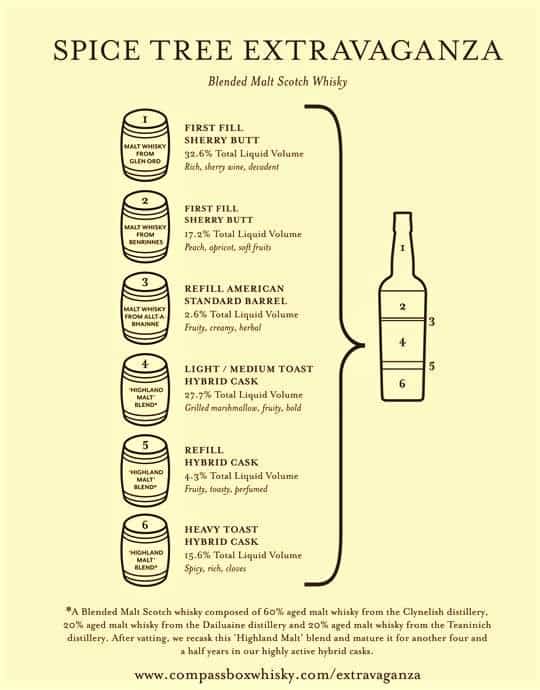 If you’re like me, the first thing you notice, in the above graphic, is the highest percentage in this blend happens to be a first fill sherry Glen Ord. This sleepy, oft unsung, Highland distillery has put out some remarkable bottles of whisky over the years– especially in independently bottled Signatory releases. So, I was glad to see that Glen Ord topped the list.

Benrinnes is another distillery that caught my eye in the infographic. As a matter of fact, I recently purchased a Signatory bottling that I am dying to crack open and try. Here, in my home town of Portland, Benrinnes bottlings are cost-inhibitive, to say the least.

The other ingredients are either too small to mention, or listed rather arcanely as “Highland Malt Blends.” No matter. If you are curious about what’s in the rest of the blend, feel free to contact Compass Box directly. The company will be more than happy to tell you directly. 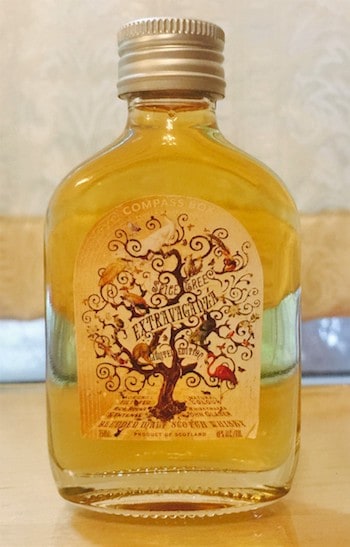 Nose: I feel like I’m holding up a spoonful of fruit compote. There are stewed peaches, rhubarb, pear, as well as some fresh berries. I’m getting marionberry and raspberry, to be precise. Wow, the sherry presence is palpable here, but not overpowering. Dare I admit there is a candied presence here, as well? Reminds me of Jolly Rancher watermelon hard candy, along with some bees wax. A kind of creaminess holds everything together, as though blanketed under a cozy layer of whipping cream. Last but not least, there comes a hint of balsa wood. Very decadent.

Palate: The wood presence is a tad more bitter, right off the bat, than I had expected, but this is actually a good thing, as it balances out the sweet meats (which aren’t actually animal flesh, by the way, but rather confectionery goodies). The beeswax presence is here, as in the nose, and it’s making me wonder if perhaps some of those “mystery ingredients” come from Clynelish. Yes, I think that is safe to assume. Delightful.

Marshmallow nougat takes the place of the whipping cream scent, and there is also a sherry presence from the first fill casks that evokes dried jammy fruits like figs (yes, there is such a thing as fig jam), plum, quince…and even squash, if this is possible. Let me taste it again, just to be sure. Oh yes, there it is, a very faint squashy note. Almost savory, along with a hint of Honduran cigar wrapper.

Finish: Now that my glass has been sitting for a while, the lower ABV is not as noticeable. Wunderbar. The finale of this blend does not disappoint. It’s also fair to say that it doesn’t really tend to concentrate in any one part of the mouth or tongue, which is pleasantly ubiquitous. The oaken and the sweet notes duke it out, with the wood winning in the end, but certainly not with a KO. Both influences–sweet and bitter–are well balanced, and smoothly integrated into the whisky’s last impression.

For some reason, The Nutcracker also comes to mind, as I enjoy Spice Tree Extravaganza whilst pondering the finer things in life. Yes, this is a holiday dram, to be sure. Chalk up another victory for John Glaser. Who needs fancy wood staves, anyhow? Then again, if he had used them, I’m fairly certain that the price of this whisky blend would be lower. Why is that? Because new French oak casks are expensive, that’s why.

Actually, this wood presence reminds a little of Glenmorangie’s Ealanta, which Jim Murray praised enough to wipe the shelves clean across the world in a few months after his pronouncement. I do miss Ealanta. Holy cow, it was good.