Arranta is Gaelic for “intrepid and daring,” although to my ear, the word sounds more like the name of a mid-sized sedan than a clarion call to innovation and fearlessness. It’s also an odd choice to name a whisky that, on the surface, sounds a little…pedestrian.

Speyburn Arranta Casks is a limited edition, U.S.-only release of non-age stated single malt aged in first-fill ex bourbon casks. It’s bottled at a respectable 46% alcohol and comes in an attractive canister that shows off the “A-star” mark that Speyburn’s distillery manager uses to mark barrels intended for this bottling.

Ex-bourbon barrels are pretty standard vessels for aging Scotch whisky. Thanks to American laws mandating bourbon producers use each barrel just once, there’s a steady and inexpensive supply of them across the Atlantic. They’re also relatively gentle on the aging malt, imparting flavors of vanilla, spice, and caramel without camouflaging distillery character the way over-exuberant sherry and wine casks can.

So no, perhaps ex-bourbon casks aren’t the most ground-breaking production decision Speyburn could have made. Yet I appreciate the recognition that not every whisky needs to be doped up with every Bordeaux cask and Port pipe the warehouse manger could get their hands on.

A bit of background about the producer: Located in Speyside, Speyburn is a somewhat underappreciated brand known for its value pricing and light, floral character. Built in 1897, it’s part of the Inver House portfolio, which also includes Pulteney, Balblair, Knockdhu, and Balmenach. You’d never guess it from its delicate style, but Speyburn still uses worm tub condensers, which are usually associated with heavy, oily malts (go figure – Scotch will always surprise you).

So, is Speyburn’s Arranta Casks single malt a bold new step in an intrepid, daring direction for this budget-friendly producer? Or will it be just as exciting as a sensible new family car? 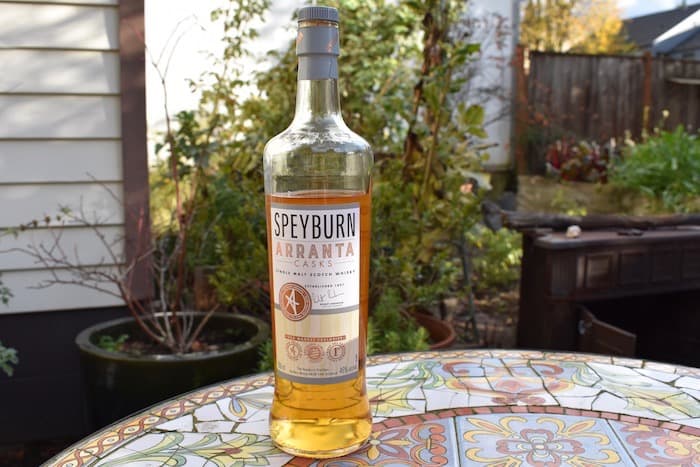 Upon first tasting, I didn’t love this whisky. It felt one-dimensional, a little too thin, and overly banana-oriented. Over time, however, I began to find Arranta a bit more interesting, and the higher proof is a welcome touch for such a budget-friendly whisky. Then, in a wonderful illustration of context being key, it was excellent in a hot toddy enjoyed fireside during a (fearless, intrepid) December camping excursion in western Oregon, with hot water coaxing out some surprisingly nutty toffee tones.