Signatory Vintage is an independent Scotch whisky bottler based out of Pertshire, Scotland. The company ambitiously selects barrels from throughout Scotland and bottles them under their own label. Unlike the Scotch Malt Whisky Society, Signatory uses the distillery source as the key describing factor for each bottle. The bottle described today is from the Blair Athol distillery, which is but a stone’s throw from the headquarters of Signatory. Blair Athol mostly contributes to the Diageo brands, but also produces a 12 year single malt.

Many Scotch distilleries don’t produce individual bottlings of their products. Instead, they produce malt whisky for the blends that dominate the global market. This process has evolved to ensure consistency in those brands. The opposite end of the spectrum from the predictability approach is the single barrel release. Signatory recognizes that the distilleries that mostly end up in blends also have some amazing single barrels hidden away. The result is the opportunity to taste uncommon whiskies that wouldn’t usually be put into a bottle at all.

Signatory currently has three main ‘collections’ including 86 Proof, Cask Stength, and Un-Chillfiltered. Their products can be found at specialty liquor stores and online, and present the opportunity to taste rare whisky with very special flavor profiles that someone selected just for you.

On a side note, I let my Dad have some sips, and he wanted to write the review. Here’s what he thought:

“So this whisky is rich, and probably what you need to be in order to procure a bottle.  Not exactly smooth, it has a nice kick, partly due to being almost 55 percent alcohol, so you might want an ice cube or two in it like me, because I like my whisky cold.  The amazing thing is they had the foresight to distill a whisky like this 30 years ago, so that I could enjoy a glass after a hard day kite-boarding in the Columbia River Gorge.  I would also enjoy it on a small cruise ship circumnavigating the island of Iceland, where I’ll be in a month.

Only about 544 bottles were put away, though, so good luck finding one of the remaining bottles that may or may not be in circulation.  It’s way better than the Crown Royal at the duty-free shop, and I’m hoping Cameron lets me keep the rest of the bottle.  In the meantime I think I”ll have another glass.  I’ll leave the stars to him.  – Dad”  *Edited for clarity. 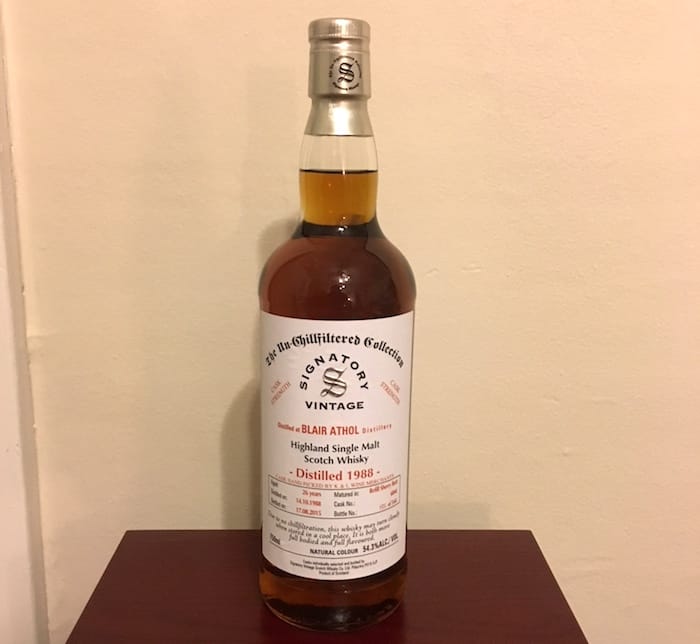 Palate: The high proof gives some initial heat, but it brings structure. The time spent in the barrel adds to the body as well, and you are salivating with the first sip. It’s chewy and almost chalky, but the sherry butt brings incredible flavors. Spices like clove and nutmeg are present, but they only help highlight the dried figs, white chocolate, tree fruit, and banana fosters, all with a cherry on top. A brie-like softness and savory aspect envelope this well-rounded whisky into a very enjoyable drinking experience.

Signatory Vintage does a great thing for the scotch whisky world. While blended Scotch is a wonderful thing, it can occasionally be heartbreaking knowing that some amazing barrels are losing their identity when molded into a blend. Signatory also gives those distilleries that usually don't get a chance to stand out with their own label a spot in the front row of desirable bottles. This 26-year-old, sherry-heavy, Highland single malt from Blair Athol is a true experience. It is delicious, unique, and rare. It exemplifies the style of the distillery, showing off the skill and craft the Blair Athol distillers carried in 1988. It is history in a glass, and it also helps us understand why blends can be so good too! Quality whisky creates quality blends, but I am happy to have this particular barrel as-is.

Read More Whiskey News
Whiskey Review: Jack Daniel’s Tennessee Taster’s Selection #6 Jamaican Allspice
4
User Rating 5 (3 votes)
Sending
114
Shares
704
Views
Share on FacebookShare on TwitterGet Our Newsletter
Cheers to the Dads! Personalize a bottle of his favorite whiskey to create a modern gift for the modern man. Use code: FATHERSDAY20 for $20 off your next order of $100 or more at ReserveBar