Editor’s Note: This whisky was provided to us as a review sample by Scotch Malt Whisky Society. This in no way, per our editorial policies, influenced the final outcome of this review.

The Scotch Malt Whisky Society (SMWS) was founded in Edinburgh in the late 1970s, when a whisky enthusiast bought a cask directly from a distillery, split the cost with his friends, and shared the delicious proceeds. What started as a casual club has morphed into a global organization, complete with branches in Asia, Australia, North America, and mainland Europe. A membership to the U.S. branch costs $99 a year, which entitles you to shop online from SMWS stocks as well as visit the members’ rooms in Edinburgh and London.

All SMWS bottlings are single cask, sold at cask strength without coloring or chill filtration. Single malt Scotch whisky is definitely the primary focus, but over the years the SMWS has expanded into Irish whisky, bourbon, French brandies, and rum as well.

One of the most entertaining aspects of the SMWS is its organizational system. Bottlings are sold labeled with a fanciful name—think “Happy in the Potting Shed” or “Preparation for Skinny Dipping”—instead of the distillery they come from. Alongside the name, an evocative phrase or two gives you a sense of the character of the spirit inside.

Yet the origins aren’t secret. Instead, a number printed on the label refers to the distillery of origin, as well as the number of casks the SMWS has bottled from that distillery. You have to go online and look up the corresponding distillery if you want to know. The result is a semi-blind tasting experience that puts the focus on the flavor first, and gives drinkers a chance to experience a whisky on its own terms, free from preconceptions.

I recently got the chance to taste Moonlight in New York, the 16th SMWS bottling of Benriach. This single barrel selection was distilled in 2009 and aged eight years in a first-fill ex-bourbon cask before bottling at 59.5% alcohol by volume. What might Moonlight in New York taste like? The label has a few pleasingly DaDa-esque hints: “Moonlight path fragrance led us via a zingy gooseberry salsa and diluted over a fizzy sweet pineapple punch to a New York vanilla egg cream.”

My personal experience with New York’s moonlight is admittedly minimal, but from my last visit seeing college friends in 2006 I remember little in the way of zingy gooseberry salsa and plenty of warm beer and truck exhaust enjoyed from a DUMBO rooftop. Here’s hoping Moonlight in New York skips that part. 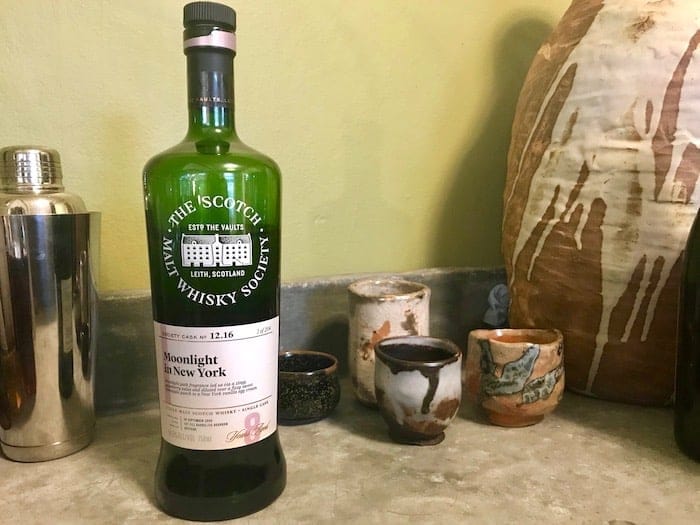 Palate: Sweet, transparent, and very warm, with thick spiked eggnog, lightly toasted white milk bread, licorice, and blanched almonds. There’s also acidity – kiwi and grape again – and an interesting tropical component without being overly flamboyant. Pineapple? But caramelized or candied, not like a fresh, juicy pineapple. It feels almost syrupy on the palate, like muscatel wine or cream sherry. The finish is very long.

This is a fun, very unusual whisky that provided fuel for a good 30 minutes of discussion with fellow tasters. It’s billowy and transparent on the palate, like the first spring day out in a dress without tights, yet it also has a creamy, oily quality. Refined and ethereal, it’s a little hard to discern the barrel effect. It’s not immature, but it’s far from oaky, keeping the focus on the spirit. Lovely.