The notion of terroir—the sum of the environmental factors that influence the flavor and character of a wine—is still relatively new to the spirits world, but it’s gaining traction gradually. With Rozelieures, a line of whiskies from the Grallet Dupic distillery in northeastern France, terroir is put front and center.

Rozelieures is made in, no surprise, the village of Rozelieures—about 30 miles southeast of Nancy, if you’re up on your French geography. Their website emphasizes how the terroir of the Lorraine region is ideally suited for whiskey production. It’s a major barley-growing region—producing 20% of malting barley grown in France, and exporting some of it to Scotland—and is home to sizable brewing and distilling industries (though distilling, historically, has been limited to fruit brandies). Grallet Dupic is a 150-year-old grower and distiller of Mirabelle plums; the whisky side of the business dates to the early 2000s.

They’re not the only French distillery making whisky—Warenghem and Glann ar Mor, both in Brittany, are two notable examples—but they do claim to be the only one making peated whisky. All the barley used at Rozelieures is grown in Lorraine, some of it onsite. It’s aged in three different wine storehouses, one of them in a disused military fort dating to the 1870s. The distillery uses a variety of used barrels, from France, Kentucky, and Spain.

The Rare Collection, specifically, is an expression aged in French Sauternes casks, which the website notes impart “soft, round fruit notes against a sherry background.” It’s bottled at 40% ABV. 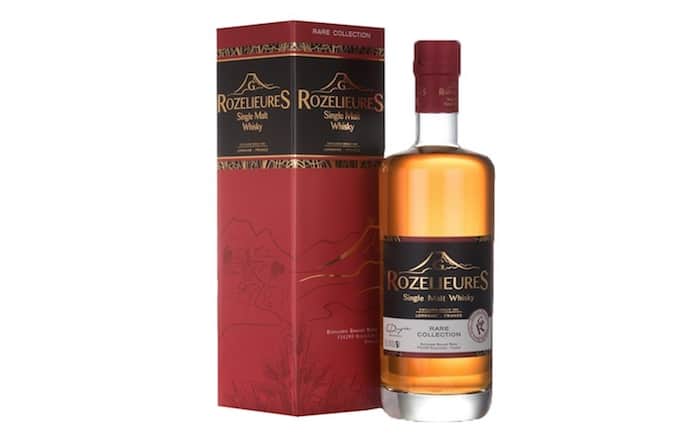 Nose: My first impression is quite malty and yeasty: Cheerios, rising bread dough, and a little honey. The fruit is there, but it’s fairly subtle, calling raisins and dried cranberries to mind. Light smoke.

Palate: The fruit is more prevalent on the palate; I get some definite dark fruit/red wine notes alongwide the malt and grain ones. There’s also a dose of sweet caramel and honey. I don’t notice much smoke on the palate, but it’s there on the finish. Faintly drying, texturally.

I've only gotten the opportunity to taste two French whiskies (the other one was the Les Moissons single malt from Domaine des Hautes Glaces) but both have been very good—which is perhaps no surprise, given that the French are the largest consumers of Scotch whisky worldwide.

This is a very well-rounded, balanced single malt that doesn't beat you over the head with any one component. The peat is subtle and elegant, and the fruit is just enough to add some complexity to a fairly malty flavor profile.