Whisky Review Round Up: Johnnie Walker Song of Ice/Song of Fire

Editor’s Note: These whiskies were provided to us as review samples by Diageo. This in no way, per our editorial policies, influenced the final outcome of this review.

One thing you have to give blended Scotch whisky brand Johnnie Walker’s parent company Diageo credit for is how well they’ve milked the Game of Thrones label. Last year, for example, they debuted a collection of eight whiskies tied to various Houses and the Night’s Watch, and then there’s also the Johnnie Walker White Edition bottling. Joining this latter one now are two more Walker expressions with Thrones tie ins.

And here we are with A Song of Ice and A Song of Fire, whiskies representative of the Houses Stark and  Targaryen. I thought cool, why not? Albeit the fact that the series ended a while ago, chances are that these two will sell to adoring fans, especially as a limited release.

Two different distilleries where chosen to a given House. For House Stark we have Clynelish and for Targaryen we have Caol Ila. It makes sense, given the styles of Scotch whisky that the folks at Johnnie Walker were aiming for.

“Johnnie Walker and Game of Thrones are an epic pairing,” said Sophie Kelly, Senior Vice President, Whiskies Diageo North America, in a prepared statement. “There is as much for people to discover and explore within the world of whisky as there is within the world of the show. Johnnie Walker A Song of Ice and A Song of Fire perfectly capture the essence of House Stark and House Targaryen, from the bottle designs to the unique Scotch whiskies within.

“Each new blend brings to life a different profile of flavors – one crisp and clean, the other rich and spicy. We hope people enjoy trying both while reliving the series with friends.”

Each of these Scotches are available individually, but for the fans out there, it might be worth the $70 or so for the impressive box set. 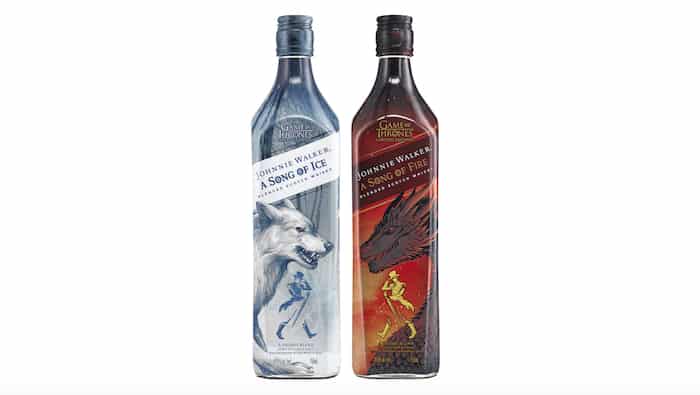 Appearance: Burnt orange, earl grey tea. The bottle is frosted and features a picture of a dire wolf.

Palate: Light bodied, a kiss of peat, and orchard fruit somewhere between peach and nectarine.

Final Thoughts: The best place to start is how refreshing this Scotch was. One could envision pouring an entire pint glass of it over ice and not bat an eye until it’s too late. The lightness and fruit certainly do lend themselves as to the name A Song of Ice.

Appearance: Light amber or perhaps a pale yellow. The bottle is frosted and features a picture of a dragon.

Nose: Citrus and black pepper up front, a tad bit boozy in comparison to the ice. Also found a touch of peat lingering in the background.

Palate: Once more found the whisky to be lighter bodied than expected. However, bolder flavors of graham cracker and spice, with a touch of peat. Simple and straight forward, though I was hoping for a longer finish.

Final Thoughts: I liked the direction that they went with these two whiskys. Each fairly representative of the themes that the distillers were aiming for. I just wanted more from the Song of Fire. This one is definitely the more cocktail friendly between the two. I’d like to see it in a Rob Roy style of cocktail, perhaps with a fun bitters to accentuate the flavors.